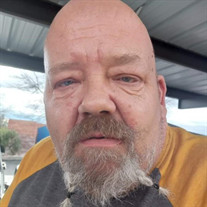 St. George, Utah, Kevin F. Huntsman, 55, passed away on April 8, 2022, in his home. He was born March 3, 1967, in Salt Lake City, Utah to Franz and Fern Huntsman. He married Robin (Left Hand) Huntsman of Richfield, Utah on July 7, 1995. Kevin was raised in Manti, Utah. He loved raising different breeds of rabbits. After High School he joined the Army. He enjoyed watching basketball. His favorite team was the Utah Jazz. He tried from a young age to get his girls to enjoy them as much as he did, to no avail. He also enjoyed watching wrestling and MMA. He liked the outdoors, camping, and fishing mostly. He worked at Walmart for the last 13 years. Preceded in death by his father, Franz L. Huntsman, and Mother Fern E. Huntsman both of Manti, Utah. Also preceded in death by his twin sister Tammy Fern Huntsman. Kevin is survived by his wife Robin Huntsman of St. George, Utah, his children Joshua Anthony Huntsman of St. George, Utah, Tammy Terry of St. George, Utah, and Lillian Fern Huntsman of St. George, Utah. He is survived by sisters Heidi Erickson, and Vicky Kasalek (Mel). He leaves behind 6 grandchildren: Tucker, Wyatt, Austin, Dante, Charlotte, and Theodore. The Family would like to Thank Pathways Hospice and Serenity Funeral Home for taking excellent care of Kevin and the compassion they showed to the family. Funeral Services will be held at 12 pm on Saturday, April 16, 2022, at the 10th Ward Chapel at 820 N. Valley View Dr. St. George, Utah. A viewing will be held at 11 am with burial to follow at Tonaquint Cemetery at 1777 S. Dixie Dr. Saint George, Utah.

The family of Kevin F Huntsman created this Life Tributes page to make it easy to share your memories.

Send flowers to the Huntsman family.