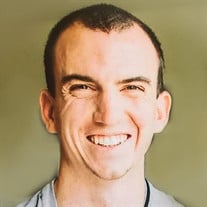 Kyle Richard Lamoreaux passed away August 3, 2019. He was born in La Grande, Oregon on February 19, 1989 to his parents Richard and Marci Lamoreaux. He married Elaine Elizabeth on March 2, 2015. Kyle was raised in Orem, Utah. He attended Timpanogos High School. Kyle was a kind, caring, loving and generous man. He was even more than that to his close friends and family. He was an avid protector of those he loved and of this country. He was also an awesome card player and enjoyed playing strategic games. One of Kyle's best qualities was his great sense of humor. Kyle was unselfish in giving his time to those in need even if it meant sacrificing his own time and resources. He gave selflessly to anybody who needed his help without them having to ask. He was a helpful son, loyal brother, an amazing husband and a courageous father. He was a Marine and a skilled martial artist. Anything he did, he invested his heart and soul into it, and he always came out with more people who he considered family than when he started. He earned his associates degree and was working toward a business degree. He began practicing martial arts at the age of 15 and became an instructor where he highly enjoyed this role as a leader. He returned to martial arts after his military service and it was a goal of his to one day own his own studio. Since his return from the Marines he competed at the PanAmerican Championships (11 countries represented) winning 4 Gold medals, 1 silver, and 1 bronze. He competed at the Mexico National Championships winning 2 Gold Medals and 1 silver, and performed on the Demonstration Team, which is a very high honor. He competed at Battle of the Mountain in Pittsburg, taking silver and performing again on the Demonstration Team. He recently competed at the World Championships (23 countries represented) in Korea, getting to the finals podium and winning 2 bronze metals and performing again on the Demonstration Team. He accomplished his third degree black belt in both Haidong Gumdo and traditional Taekwondo. He was also the announced successor to Lotus Blossom Martial Arts, the studio he trained with for over 15 years. Kyle served in the United States Marine Corps during the Global War on Terror, deploying twice to Afghanistan in support of Operation Enduring Freedom as a scout sniper team leader. Kyle earned Sergeant rank in the military and was a leader, as well as a skilled instructor and trainer. He dedicate part of his life to his country and went on to serve for almost ten years. He spent his military service in many different areas, though primarily lived in Hawaii, California and Okinawa, Japan. Kyle’s tattoos most often had a lot of meaning behind them. Kyle used tattoos as an expression. An expression of good and evil, light and dark, right and wrong. The battle of good and evil is something that can ruin men and make the best of them. Kyle understood this struggle more than most and presented it proudly, regardless of how others saw him. His bold confidence in himself, his decisions and his experiences will never be forgotten. Kyle’s life was cut short. However, he is leaving his loved ones with the best memories of him and they will cherish and hold onto them for the rest of their lives. He is survived by his wife Elaine, his daughter Adelaide Jeanne (AJ), his son Robin Kyle, his father Richard, his mother Marci, and his siblings Alicia (Ryan and Calvin Cummins), Derrick, Madasyn, and Matthew. Though his physical presence is no longer on this earth, he will be in our hearts and minds until we too find our way home. A Celebration of Kyle’s life will take place on Wednesday, August 7, 2019, at the chapel on 1674 N. 200 W. in Orem, Utah. A visitation will begin at 9:00 am and conclude at 10:30 am. The funeral service will begin at 11:00 am. Interment with Military Honors will follow at the Orem City Cemetery. Kyle’s loved ones appreciates your thoughts and prayers on their behalf at this time. There is go fund me account created for his family if you wish to contribute. https://www.gofundme.com/f/kyle-lamboreaux-family-relief-fund Information and audio recording of the service will be available in the weeks following. Contact [email protected] for information.

Kyle Richard Lamoreaux passed away August 3, 2019. He was born in La Grande, Oregon on February 19, 1989 to his parents Richard and Marci Lamoreaux. He married Elaine Elizabeth on March 2, 2015. Kyle was raised in Orem, Utah. He attended Timpanogos... View Obituary & Service Information

The family of Kyle Richard Lamoreaux created this Life Tributes page to make it easy to share your memories.

Send flowers to the Lamoreaux family.