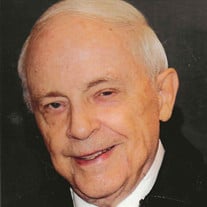 Lamar Wallace Koford Jr was born on Dec. 18, 1932, at Physicians Surgeon’s Hospital in Glendale, Calif. to the proud parents of LaMar Wallace Koford and Luella ‘Blue’ Bickmore and older sister, Helen Luella Koford AKA Terry Moore. He attended Richardson D. White Grammar School, Woodrow Wilson Jr. High School and Glendale High School. In kindergarten, he liked to play marbles. His young friends, Dick Callister and Ashley Jones, helped raise his pigeons, go to the movies and play miniature golf. Later he worked as a swimming pool lifeguard. His loved the boysenberry pies that his father would bring home from work. In 5th grade, he learned to play the trumpet and occasionally played it the rest of his life. In 1954 he graduated from Brigham Young University, majored in Political Science and minored in Sociology. He was a member of the Val Hyric social club. Peter DeParma was a friend. His freshman year he got his first car, a 1941 Ford. After college, he served on a mission at the Texas Louisana Mission. Duane Richin’s was a companion who he kept in touch with throughout his life. He baptized Cynthia Lewis who later married and had a family of ten children. He also helped baptize Brother Johns who became a Stake President. After the mission, in 1956 he was drafted into the Army for 2 years. He served in Toul, France and was a clerk. After the military service, he worked for Security Bank in the Escrow Department when worked for Ducommun Metals & Supply for 5 years in Sales. He later worked for Benjamin Metals in Los Angeles, California for 30 years in Sales and Purchasing. He attended a church single’s group meeting where he met his good long-time friend, Jack Wilson and his wife, Ginny. Wally and Ginny married June 25, 1982 at the Los Angeles Temple. They lived in Norwalk, California with a parrot, Pasha and little dog, Puff. In January 1996, they retired to Saint George, Utah. They both enjoyed being active members of the church and served as church librarians. They enjoyed picnics, hikes, bicycling and watching BYU football games on TV together. Wally has always had a strong testimony of the Savior and Jesus Christ. He studied and defended his belief in the church many times. He was loved and adored by his wife, Ginny, of 36 years, and his 5 dogs (Bo, Puff, Tilly, Brit, and Toby) who were as faithful to him as he was to the church. Bless you, Wally.

The family of Lamar Wallace Koford Jr created this Life Tributes page to make it easy to share your memories.

Send flowers to the Koford family.