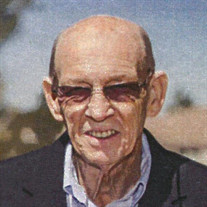 LARRY DEAN HEDDINGS Kanarraville, UT – Larry Dean Heddings, Age 71, passed away on October 4, 2018 in Cedar City, UT. Larry was born on July 17, 1947, in Braymer, Missouri. During his school years he lettered in Track and also all four years in band as he played the baritone in his High School’s Marching Band In the late 1980’s Larry became a member of the INTERNATIONAL ASSOCIATION OF MACHINISTS. Larry had been an avid Ham Radio Operator for over 40 years. He served in the United States Air Force for 4 years and was an electrician. After his honorable discharge from the Air Force, he worked at Veriform Plastic where he met his wife, Susan Oakes. They were married on January 20, 1972, and had one daughter named Susan. After working at Veriform Plastic, he went to work for Owens Corning Fiberglass as a supervisor. After leaving Owens Corning, he worked for American Airlines, (formerly TWA) as an electrician. He retired from American Airlines after 20 years. He then moved to Kanarraville, UT in 2009. He was married to Rudia Louise Manthei on May 29, 2010 and became a confirmed and active member of Trinity Lutheran Church in Cedar City, UT. While at Trinity, he served as President of the Church Council and also as Church Trustee. While in Cedar City, UT, he spent one year teaching manufacturing at the Southwest Technology College. He is survived by: his wife, Rudia Heddings of Kanarraville,UT; a daughter Susan (Brian) Caldwell; and two grandchildren, Abigail and Hayden, all who reside in Platte City, MO; he is also survived by three siblings, Elvin Eugene Heddings, Trudie (Bill) Boothe and Sheila Bullin; and several nieces, nephews and cousins. He was preceded in death by; his father, Edgar Paul Heddings; his mother, Lois Faye Reigel; sister-in-law, Phyllis Heddings; and brother-in-law, Joe Bullin. A memorial service with full Military Honors will be held on October 9, 2018, at 1:00 pm at the Trinity Lutheran Church, 410 E. 1935 N., Cedar City, UT 84721. A reception will follow at the church. In lieu of flowers, please send donations to Trinity Lutheran Church at the address above. Family and friends are invited to share condolences online at www.SerenityStG.com. Arrangements and memorial tree planting by Serenity Funeral Home of Southern Utah, 435-986-2085.

The family of Larry Dean Heddings created this Life Tributes page to make it easy to share your memories.

Send flowers to the Heddings family.