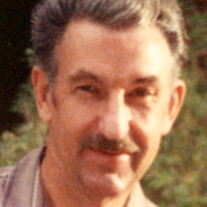 Vern Hartley, 83, passed away in Cedar City, Utah on April 14, 2018 at his home. LaVenard Earl Hartley was born in Cedar City, Utah, August 26, 1934 to Edna Merle Parkinson and LaVenard Hartley. Because of his unusual name he chose to go by Vern most of his life. Most of his young life was spent in Cedar City, with some time on his Parkinson grandparents’ farm in Pintura and at the Bristol Mine near Pioche, Nevada, where his father worked. When he was just a kid, he would help his dad make homemade dynamite to use in a coal mine during WWII when dynamite was unavailable. He would help him drill the holes then roll pages from magazines and twist one end. They would fill them with black powder and add a fuse. It would take quite a few in a wall of the mine to bring it down. He started working hard as a kid and was always a hard worker who kept busy doing things. In 1951 the family moved to Panaca, Nevada where he met his first wife and the mother of his children, Marba Woods. They were married in 1951 and moved to Henderson, Nevada where he worked first as a tire man for Sears and then at the Titanium Plant for about 5 years. During this time, they were able to buy a WWII prefab home, which he expertly refurbished and enlarged to meet the needs of their growing family. Marilyn, Peggy, Curt and Wayne came quickly. When Wayne was born, Vern took over all the heavy house work while Marba recuperated, not because there was a great need but just to be kind to her. Next he was able to work at the Nevada Test Site, until 1967. He had to leave home extremely early on Monday mornings and would return late Friday nights. It was a good job but very tiring. Several men would drive together and everyone would claim they were too tired to make the long drive, which left him driving most of the time. He got a little tired of this but learned that if he would gently let the truck drift over to the side of the road and kick up a little gravel, all of his companions would suddenly be wide awake and eager to drive. He had a great sense of humor and could tell a story very well. Next the family moved to San Diego where he worked managing a Kentucky Fried Chicken store. This started his work in the food industry that he continued with in Picnic n Chicken and KFC for many years. It was during this time that Marba and Vern divorced. He married Dottie Johnson in 1976 in Las Vegas, Nevada. They lived in Spokane where he was a regional manager for KFC. They later moved to Wichita, Kansas, where her sons lived and bought a restaurant, Ty’s Diner, which they made a huge success. He would get up and be peeling 300 pounds of potatoes for fries every morning by 4 am. He did all the cooking, cleaning and repairing at the Diner. It soon gained a great reputation, and some of you may have seen the rave newspaper review they later kept on their kitchen wall as a memento. True to his good and responsible nature, in the mid 1990’s they sold Ty’s Diner and moved to Cedar City, Utah so that he could be closer to his aging mother and help care for her. Even after his ”retirement” he worked as a handyman around town until just a few years ago. He loved fishing, camping, hiking or just going for a Sunday drive. He loved his dogs, especially Stormy and would walk with her in the mountain near his home every day until she died. He loved to fix breakfast for everyone. It was his favorite meal of the day. He called himself a “Jack of all trades” and he truly was. He could build, fix or maintain anything. He was an expert worker of leather and made many wonderful items. He also loved woodworking, a skill he used in his handyman work, home improvement projects, and children’s toys. He refurbished their home and took care of neighbors in need. He loved sharing memories, telling humorous family stories. He taught his children to be caring and helpful – a “doer of good deeds.” He taught them to have a good work ethic and above all else to be honest and trustworthy. We treasure his teaching and kind hearted ways, and will always remember his laughter and sense of humor. He is survived by his first wife, Marba LaBarrer; his daughter Marilyn Jones (Darell); his son Wayne Hartley (Jean); his brother Errol Hartley (Diane) of Panaca, Nevada; his sister Judy Robertson (Jim) of Provo, Utah: 11 grandchildren, 28 great grandchildren, 2 great great grandchildren and many nieces and nephews. He was preceded in death by his beloved sister, JaNeil Hartley, his parents and two children, Peggy and Curt. His wife, Dottie passed away the day after he died on April 15, 2018. A viewing will be held at the Serenity Mortuary at 1316 South 400 East, Suite A-3 St. George, Utah from 10 to 11 am on Friday April 20, 2018. A family luncheon will be held at the LDS chapel at 155 East 400 South in Cedar City from 12:30-2:30 pm followed by a graveside service at 3:00 pm at the Cedar City Cemetery.

Vern Hartley, 83, passed away in Cedar City, Utah on April 14, 2018 at his home. LaVenard Earl Hartley was born in Cedar City, Utah, August 26, 1934 to Edna Merle Parkinson and LaVenard Hartley. Because of his unusual name he chose to go by... View Obituary & Service Information

The family of LaVenard Hartley created this Life Tributes page to make it easy to share your memories.

Send flowers to the Hartley family.