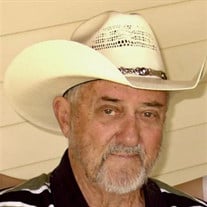 Lee A. Robertson of Washington, Utah passed away peacefully at home on February 22, 2020 after a long battle with cancer. He was 88 years old. The youngest son of Wm Bernard and Muriel Pitts Robertson of Springville, Utah and brother to both Matt Robertson of Washington, Utah and Karen Boulter of Provo, Utah (deceased). Following high school he enlisted in the Navy where he served four years during the Korean War. A lover of music and a natural musician himself, he served two years in the Navy Jazz Band and two years aboard the USS Fulton, a submarine tender based in New London, Connecticut. Upon his honorable discharge in 1953, he married Eva Carol Leslie of Springville, Utah and together they raised 5 children. His marriage lasted a lifetime. Lee and his wife Eva shared a sense of adventure, service, and purpose. Lee worked for the the Bell System and retired after 31 years as Outstate Manager of Business Services. Shortly after his retirement he and Eva joined the Peace Corps and spent 2 and one-half years in Papua New Guinea with the challenge of rescuing a failing primitive art business. The project was a success and they were later featured in the New York Times, commemorating the 25th anniversary of the Peace Corps. Lee also had a passion for writing and he authored a humor column in the newspaper for many years. As a licensed private pilot, his love of flying provided many adventures. Lee was a lifetime member of the BPOE, a former F&AM member, Lions International, Springville Rotary and Mapleton Jaycee’s. Survivors include his children Anthony Lee Robertson, Lisa White, Valerie Robertson, and Jesse Robertson; Five grandchildren and three great grandchildren. In lieu of a ceremony, Lee asked to be remembered as a man who loved his family with all of his heart; took the road less traveled, and fought hard until he took his last breath. God bless, Lee Robertson.

Lee A. Robertson of Washington, Utah passed away peacefully at home on February 22, 2020 after a long battle with cancer. He was 88 years old. The youngest son of Wm Bernard and Muriel Pitts Robertson of Springville, Utah and brother to both... View Obituary & Service Information

The family of Lee A. Robertson created this Life Tributes page to make it easy to share your memories.

Lee A. Robertson of Washington, Utah passed away peacefully at...

Send flowers to the Robertson family.