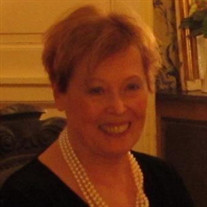 Lenita Childers, entered this world on Mother’s Day, May 12, 1940, and died, leaving it a better place, on December 11, 2019. She was the daughter of Leonard L. Childers and Thelma Coleman Childers of Kansas City, Kansas. A 1958 graduate of Wyandotte High School, she attended Kansas State University, the University of Hawaii and Southern Methodist University before earning her B.S. (Magna Cum Laude), M.A. and Ph.D. at the University of Kansas. The year following her undergraduate degree was spent in Paris as a Fulbright grantee. Returning to Lawrence to begin graduate studies, she met fellow student Michael Locey, and the couple were married on September 5, 1964. In 1969, she took a position in the Department of Romance Languages at Bowling Green State University in Ohio, where she and Michael would continue teaching until retirement in 1999. Her research interests and publications focused on the areas of medieval theater and Francophone women writers. She was a strong advocate of study abroad, tirelessly promoting the Bowling Green Academic Year Abroad among her students, while also devoting untold hours behind the scenes logged into the university mainframe, verifying enrollments and financial balances to insure the viability of all three of Bowling Green’s European language programs. Under her leadership the offerings in France were expanded to include Masters-level courses, summer sessions, even travel/study opportunities for advanced High School students. Lenita greatly enjoyed the interaction with students, frequently inviting her classes into her home near the campus to learn to prepare and to appreciate various French specialties. Gifted with a beautiful voice, and a persistent advocate for singing as a tool in language acquisition, she could often be seen heading off to class, her guitar and bundles of song sheets in tow. When retirement had removed her from the classroom, she turned to organizing annual trips for members of the Bowling Green Retirees Association, each time focusing on a specific region in France. Lenita enjoyed cooking and entertaining at home both in the US and the tiny stone cottage in France, perched on a hillside overlooking the River Loire. In 2016, the couple joined their daughter Abigail and her family living in Saint George, Utah. Lenita died there in the Intermountain Hospital on December 11, 2019, following a brief illness. Her memory is cherished by her husband of 55 years; her sister Margana Hunter of Kansas City, Missouri; daughters Elizabeth Locey-Hampe of Dunwoody, Georgia, and Abigail Porter of Saint George; sons-in-law Thomas Hampe and Timothy Porter; granddaughter Anne-Charlotte Locey Hampe; and grandsons Xavier Porter and Maxim Porter. As a life-long believer in the value of learning, Lenita made her final gesture the donation of her remains to medical research. In lieu of burial, a tree has been planted in a National Forest. Tributes may be made to the University of Kansas Department of French, Francophone and Italian Studies, or to the charity of one’s choice. Tu ne te plains jamais et crois très sûrement Que rien de vrai ne meurt quand on s'aime dûment, Et que le feu vivant dont se réchauffe notre âme Consume jusqu'au deuil pour en grandir sa flamme.

Lenita Childers, entered this world on Mother&#8217;s Day, May 12, 1940, and died, leaving it a better place, on December 11, 2019. She was the daughter of Leonard L. Childers and Thelma Coleman Childers of Kansas City, Kansas. A 1958 graduate... View Obituary & Service Information

The family of Lenita Childers Locey created this Life Tributes page to make it easy to share your memories.

Lenita Childers, entered this world on Mother’s Day, May 12,...

Send flowers to the Locey family.