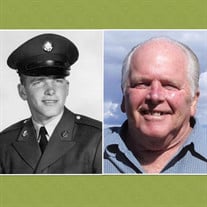 Saint George, UT -- Leslie “Les” Eugene Winston Johnson, loving husband, father of five children, grandfather, brother, and uncle, departed this life on September 17, 2021, at age 78. The immense love and care of his family surrounded him during his final battle with pneumonia. Les was born to Leslie G. Winston and Gilda Louise Haden on March 23, 1943, in Portland, Oregon. Raised in Wyoming, Colorado, Arizona, and Utah, he caused mischief at local farms, played football, and graduated from Provo High School in 1961. Stationed in Germany from 1961 through 1964, Les served in the Army as a Colonel’s Aide and qualified as an M16 Marksman. He married his sweetheart, Lynn Donaldson, on January 15, 1977, and they celebrated 44 years of marriage, two children, and many backcountry and cross-country adventures together. Les and Lynn resided most of their lives together in Riverton, Utah from 1991 - 2019. Les attended Salt Lake Community College for a short time and went on to be a self-taught businessman. He worked at Bourns Inc. and Rockwell International before becoming the Vice President of Subminiature Instruments in 1987. Les enjoyed speedboats, fast cars, camping, long scenic drives, and old western movies. As a self-taught craftsman and gardener, he spent many creative hours with his power tools and lawn tools. Les worked hard and always saw the sunrise with a cup of coffee in hand. In his later years, he loved exploring Southern Utah in his truck and walking at Grandpa’s Pond. Les could strike up a conversation with anyone and loved sharing his dreams and ideas. Les, our charismatic dreamer, will be deeply missed. Les was preceded in death by both his parents, his granddaughter Jessica Ann Johnson, and his niece Jody Johnson. Survived by his loving and devoted wife, Lynn; his children, Susan (David) Lytle, Lisa (Matt) Tobey, Mikol (Dan) Rosenbalm, Travis (Christina) Johnson, and Misty (Michael) Booth; his grandchildren, Seth, Savannah, Ethan, Emilie, Stuart, Spencer, Sam, Aundrea, Kylee, Alissa, Weston, Ezra, and Evelyn; his siblings, Karen (Carl) Smith, Lavon (Doug) Thomsen, Jonice Hubbard, Grant (Mary Johnson), and Reed Johnson; and many nieces and nephews. An inscribed brick will be placed in Les’s honor at the SunRiver Veterans Honor Park in Saint George, Utah. Les’s Celebration of Life will be at Millennial Falls on Saturday, November 6, 2021. The event center is located at 12375 S 1300 E in Draper. Gathering from 9:00 - 10:00 AM, memorial service begins at 10:00 AM, and a luncheon will follow. Family, friends, and neighbors are welcome to attend. Les was a laryngeal cancer survivor. In lieu of flowers, friends and family are encouraged to contribute to the Huntsman Cancer Foundation.

The family of Leslie Eugene Winston Johnson created this Life Tributes page to make it easy to share your memories.

Send flowers to the Johnson family.