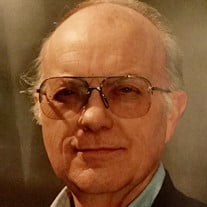 1932 ~ 2019 Our beloved Leslie Dixon Paul, age 86, of St. George Utah, University of Utah professor extraordinaire, took his final exam, passed with flying colors and graduated from this life on February 28, 2019. He was surrounded by his adoring family. Dixon, (as he was known by) was not only a lifelong learner, he was a lifelong teacher. Teaching speech pathology to graduate students in the classroom was his passion however he also loved teaching patients at the VA hospital during his employment there, how to regain their voices after strokes or surgery. He also facilitated the wonderful American Cancer Society support group known as New Voices, where he helped many people learn to speak again. Dixon loved the University of Utah. After serving in Japan during the Korean War, Dixon attend the U of U where graduated with his bachelor degree. He then went on to earn his Masters’s degree in speech pathology (also at the U) and to complete his academic journey he attended Stanford University earning his PhD in the same field. Dixon had the amazing privilege of teaching students in Australia. He and his wife Carol moved down-under for over two years were he was a professor in a college near Sydney. They traveled extensively throughout that amazing country and this became the highlight of both their lives. After retirement his thirst for knowledge was quenched through his membership in the Dixie State University’s ICL (Institute for Continued Learning) program where he was not only a student but also a teacher. He was an avid reader throughout his entire life. Dixon was a kind, loving, humble, humorous and generous man. He never said a mean or negative thing about anyone, he was the most non-judgmental person any of us had the privilege to know. He was married in the Salt Lake LDS temple to his sweetheart Carol, their marriage was just two weeks shy of 63 years. They were true soul mates. Dixion was an active member of the LDS church. He is already missed dearly by not only his wife Carol but his daughter Suzanne (Gary), his grandson Andrew (Bayli), granddaughter Courtney, grandson Shae, three great grandchildren, two sisters (Jeanne and Jinnah), close friend Rose and special niece Lori along with many other dear nieces and nephews. He is preceded in death by his son Gary, sister Afton and his loving parents Leslie Joshua Paul and Viola Paul. A tremendous thank you goes out to the Dixie Regional Medical Center’s amazing and skilled medical staff for the beautiful and loving care they gave Dixon throughout his brief illness. In lieu of flowers please feel free to donate to the American Cancer Society, an organization that was highly valued by Dixon throughout his career, in his honor. Dixon, thank you from the bottom of our hearts for gracing our lives with your beautiful soul, we are all better people because of you and your shining light. You touched the hearts of everyone who met you. A celebration of Dixon’s life will be held for family in the summer.

1932 ~ 2019 Our beloved Leslie Dixon Paul, age 86, of St. George Utah, University of Utah professor extraordinaire, took his final exam, passed with flying colors and graduated from this life on February 28, 2019. He was surrounded by his adoring... View Obituary & Service Information

The family of Leslie Dixon Paul created this Life Tributes page to make it easy to share your memories.

Send flowers to the Paul family.