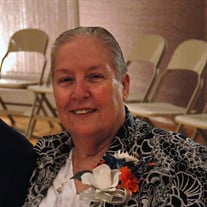 Lina Francine Richardson Lightner, age 77, passed away in St George, Utah on February 8, 2020 from complications of CSF and Vascular Dementia. Fran was born was born on April 16, 1942, in Los Angeles, California. At six weeks old she was adopted by Ruby Ethel Leutwiler and Frank Craig Richardson. Ruby and Frank's families and friends all gave Fran a very warm welcome. Fran lived her childhood in Southern California. She loved the beach and enjoyed spending time there with her mother and father. Her parenets would take her to the beach on weekends where they would lounge on the sand and watch her surf. Fran found that she loved playing a variety of musical instruments. She especially enjoyed playing the steel guitar. As a young girl, Fran played on a TV Country Western Show in Los Angeles called "Town Hall Party". Another steel guitar player, who was about her age, was Barbara Mandrell. While Fran thought she was as good as Barbara, she chose not to pursue a musical career so that she could get married and start a family. Fran was a sophomore in high school when she started working at a local movie theater. This is where she met a handsome Marine. She married John LaRue Lightner on February 21, 1959 at the Trinity Baptist Church in Indio, California. They were later sealed in the Salt Lake Temple. Fran graduated from Beaumont High School in southern California, the alma mater of both her parents. Mom worked for Bank of America in California, the U.S. Department of Commerce - Census Bureau, and Intermountain Power Service Corporation where she retired in 1997. The Lightners lived in California, Idaho, Nevada, and Utah. Fran belonged to the Church of Jesus Christ of Latter-Day Saints. She served in various callings, including the Young Womens, Primary, and Relief Society. In her retirement Mom spent many hours working on Genealogy and Family HIstory. She sought to learn about her family and enjoyed helping others learn about doing their own family research. Mom served a Family History Mission for the Church of Jesus Christ of Latter-Day Saints in St George, Utah. Mom also loved taking pictures of her family and putting them away for her family to have. These photo are treasures that will be enjoyed by her family for generations to come! Being called 'Mom' and 'Grandma' filled her heart. Her family and friends made her life complete. Fran felt she was blessed having those she could call 'family' or 'friend'. Francine is survived by her three children: Beverly Lightner Clark, John Craig Lightner, and Julie (Richard) Ott; nine grandchildren and nine great grandchildren. She is predeceased by her parents, husband, and half sister - Martha Gould Munro. The family wishes to thank everyone who helped take care of Fran during these last few weeks and months. We especially appreciate the staff at Advanced Healthcare for the kindness they showed to both Fran and her family during the most difficult moments. We also would like to thank their Hospice team-Kali, Julie, and Rachel-for their compassion and care. Finally to Kind Hearts-Barry and Sherry-for their help during Mom's final hours. In lieu of a service, the family will hold a private gathering. We would enjoy reading your thoughts of Fran through Serenity's condolences page.

Lina Francine Richardson Lightner, age 77, passed away in St George, Utah on February 8, 2020 from complications of CSF and Vascular Dementia. Fran was born was born on April 16, 1942, in Los Angeles, California. At six weeks old she was adopted... View Obituary & Service Information

The family of Lina Francine Lightner created this Life Tributes page to make it easy to share your memories.

Send flowers to the Lightner family.