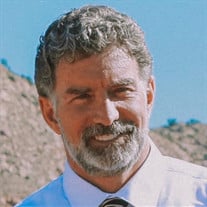 St. George, UT – Lincoln Marcus Powers, age 57, passed away peacefully at Dixie Regional Medical Center on September 3, 2018, surrounded by loving family members. He was born January 2, 1961, to Walter William “Bill” Powers and Barbara Joan Storrs in Indio, California. He met the love of his life, Joelle, in 2015 and they were married on April 21, 2017. Lincoln grew up playing baseball in Palm Springs, California, and graduated from Palm Springs High School in 1979. After high school, Lincoln attended The College of the Desert in Palm Desert, California, where he played baseball for a year. In 1987, Lincoln began his career as a Realtor, earning his Broker license in 1989. Two of Lincoln’s greatest joys, his children, Shannon, born in 1989, and Lincoln Jr., born in 1991, he shared with Tiffany Pfrimmer. In 1993, Lincoln moved his young family from Palm Springs to St. George where they were some of the very first attendees of Calvary Chapel St. George. Lincoln continued his real estate career in St. George, becoming a co-owner of Coldwell Banker Premier. Lincoln held onto biblical truth and happily and enthusiastically shared the evidence with anyone who would listen. Lincoln loved Mexican food, coffee, sports (especially baseball), comic books, reading, trivia, learning, intelligent conversation, religious and political debates, history, travelling, and most of all spending time with his family and friends. He will be greatly missed. Lincoln is survived by his wife, Joelle; his children, daughter Shannon (Ivan) Amargo of St. George, UT, Son Lincoln (Allecia) Powers Jr. of West Jordan, UT, Stepchildren, Zoe (Stefan) Larsen and Zachary Hume of St. George, UT, and Noah Hume of Annapolis, MD; Granddaughter Willow Amargo, and Grandsons Oakland Amargo, Asher Larsen, and Dante Powers; Sisters Carol Gregory and Christine Pete of Desert Hot Springs, CA, and many uncles, aunts, cousins, nieces, and nephews. Lincoln is preceded in death by his parents, Father Walter William “Bill” Powers, Mother, Barbara Joan Storrs; and two sisters Delilah Bizier and Billie Rae Powers. The family would like to thank the EMTs, Doctors, Nurses, Medical Staff, Friends, Family, and countless others for all the kindness and devotion shown during such a difficult time. As anyone who knew Lincoln knows, his grandchildren were the light of his life, so in lieu of flowers, the family requests a donation be made to a Memorial Account set up in his name for his grandchildren’s college fund at America First Credit Union. Account Number 9105206; Routing Number 324377516. A memorial service will be held on September 15, 2018, at 1 pm at Calvary Chapel St. George, 3922 S Pioneer Rd in St George, Utah. Friends and family are invited to share memories, tributes, and pictures online at www.ForeverMissed.com/LincolnPowers

The family of Lincoln Marcus Powers created this Life Tributes page to make it easy to share your memories.

Send flowers to the Powers family.