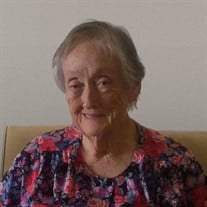 Lois Gaye Railsback Hall Evans age 82 passed away at home 14 February 2020 of causes related to age. She was born 25 July 1937 in Calico Rock, Arkansas to John William Hornaday Railsback and Stacy Belle Clark. Her mother died when she was 5 years old, about a year later her Father took Lois and her two sisters, June and Joan, to California where they were adopted by their half-brother and his wife, Ralph and LaVerna Railsback. They lived in California for several years then moved to Fillmore where she lived until she graduated from high school. After graduating from high school Lois attended CSU where she met Relden Hall. Upon his return from serving in the western states mission they were married in the Manti temple 29 September 1960. He attended CSU for a few months then they moved to Logan so he could finish his degree at Utah State University. While living there Relden died in a farming accident. Lois returned to Fillmore to live near her parents and raise their daughter who was born six weeks later. She worked at several places in Fillmore, including the dentists office, the telephone office, as an aide in the elementary school for several years and as a waitress in every restaurant in town. She was working at the Paradise Cafe when she met Bill Evans who stopped there every weekend on his way from Provo to Parowan. They were married in Las Vegas 14 February 1978 and lived in Salem until Bill retired and they moved to Parowan. Throughout her life, she made many friends, was active in church holding many callings her favorite was as a family history consultant. She was an active member of DUP and served more than once as camp Captain, she volunteered in the local DUP museum in Spanish Fork and the Rock Church in Parowan. She enjoyed many hobbies and activities, visiting her daughter's family, crocheting, scrapbooking, making birthday cards for her family and friends but her favorite was Family History and she worked most of her life researching her family and helping others find their ancestors. She was preceded in death by her sister June, her parents Ralph and LaVerna, and her first husband Relden Hall. She is survived by her husband Bill, daughter Janet (Bret) Talbott, sister Joan (Jim) Pittman and stepsons, Bruce, David (Annette), Scott (Sabrina), Neal (Tara) and Bryan (Jamie). She has 15 grandchildren, 12 great-grandchildren and many nieces and nephews who remember her with love. Services will be held at 11:00 a.m. Thursday, February 20, 2020 at 59 S. 100 W. Parowan, Utah. A viewing will be held from 9:30-10:45 a.m. prior to the services. Interment will be held in the New Harmony Cemetery.

Lois Gaye Railsback Hall Evans age 82 passed away at home 14 February 2020 of causes related to age. She was born 25 July 1937 in Calico Rock, Arkansas to John William Hornaday Railsback and Stacy Belle Clark. Her mother died when she was 5... View Obituary & Service Information

The family of Lois Gaye Evans created this Life Tributes page to make it easy to share your memories.

Send flowers to the Evans family.