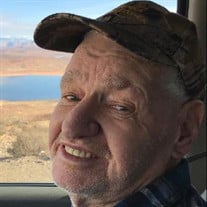 Louis “Lou” Anthony Napolitan of Page, AZ passed away after a long fight with Alzheimer’s disease on 8/28/2020. Lou was born in Stamford, CT on April 25th, 1933 and was raised in Washington PA by John & Julienne Napolitan with younger brother John “Pat” Nestor Napolitan and sister Carol Napolitan Haffke. Lou joined the US ARMY in 1951 and was honorably discharged in 1953, serving most of his military career in Korea. He spent the next several years working in a glass factory, coal mining with his father, and working several odd-jobs to help out where he could. He moved to Denver, CO in the early 60’s and took a job with Burlington Northern Railroad working as a mechanic “car knocker”. He married his first wife Maria Panfila Ojeda. Maria passed in 1974 and left Lou with 5 loving stepchildren (Teresa Ojeda, Lauro Kinney, Dalia (Alfredo) Estrada, Armando (Noelia) Ojeda, Isolia Hernandez) and one of their own (Tony (Anita) Napolitan). Lou met Ruth Ellen Oswald in 1974 and moved to Page, AZ in September of 1975 after accepting a job with the Navajo Generating Station as a Railroad Mechanic. Lou Married Ruth on October 7th, 1978 and adopted his 7th child (Travis (Belinda) Napolitan). Lou and Ruth had 4 more children (Vicki (Carl) Allen, John (Leslie) Napolitan, Patrick (Amanda) Napolitan, and Philip (Lesa) Napolitan). Lou lived life to its fullest and left nothing on the table. He led an active lifestyle enjoying walking, working on vehicles, cutting firewood, hunting, fishing, and sharing stories about all of the above. Lou enjoyed sharing his experiences with his family and friends, and would often lend a helping hand even to complete strangers. Lou was a true example of selflessness and kindness to all who knew him. Lou is survived by his wife, 11 children, 33 grandchildren, 30 great-grandchildren, and 5 great-great-grandchildren. He is preceded in death by his first wife, parents, and his siblings. The family would like to thank friends of the family, Joann Mann for her love and care, Michelle Smith (Zion’s Way Hospice), and all of the doctors, nurses, and staff at Page Hospital, Dixie Regional Medical Center, and the Wentworth at the Meadows. A memorial service will be held with limited capacity at the Page Elks Lodge on September 6th, 2020 at 2PM. In lieu of flowers, the family requests that donations be made to the Arizona Mule Deer Organization (Contact John Napolitan at [email protected]), or the Alzheimer’s Association (https://www.alz.org).

The family of Louis Anthony Napolitan created this Life Tributes page to make it easy to share your memories.

Louis “Lou” Anthony Napolitan of Page, AZ passed away after a...

Send flowers to the Napolitan family.