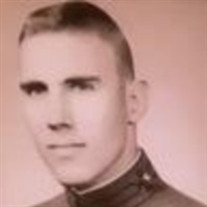 Preston Hughes (77) passed away in Santa Clara, UT, on May 23, 2020, after a year-long battle with Hodgkin's Lymphoma. He was the son of Preston L. Hughes (deceased), from Gladys, VA, and Mary Kate (McNeel) Hughes (deceased) from Louisville, MS. He is survived by his wife of 49 years, Ann Hughes, and his three children, Jonathan, Kathryn, and Carol, and nine grandchildren. Preston was born on March 27, 1943, in Washington, DC. He grew up in central Mississippi, where he attended elementary school in Louisville and junior high/high school in Kosciusko. He was a member of the undefeated Kosciusko High School football team of 1960. Graduating from Kosciusko High School in 1961, he entered the United States Military Academy at West Point, NY. In 1965, he graduated from the Military Academy and was commissioned a Second Lieutenant in the Field Artillery. He married Ann Grimshaw, from Cedar City (Enoch), Utah, in 1971 in Watsonville, CA, while he was studying Turkish at the Defense Language Institute in Monterey. Their marriage was blessed with three wonderful children: Jonathan (Michelle) Hughes, Kathryn (John) Boogaard and Carol (Scott) Hill, and with nine very special grandchildren, whom he loved dearly. During a military career spanning 27 years, Preston served two years in Vietnam and 13.5 years in Turkey. Among his assignments in Turkey were three years as Assistant Army Attache in Ankara (1975-78) and eight years as the NATO Liaison Officer to the Turkish General Staff (1981-85 and 1988-92). Ann was by his side throughout those years in Turkey, during which two of their three children were born. All the family came to think of Turkey as a "second home," and they recalled often and with great fondness the memories of the places and people they came to know during their years in that beautiful country. Upon retirement from the military, Preston and Ann settled in Kosciusko, Mississippi. Their children attended universities/college there: Jonathan to Mississippi State University, Kathryn to Millsaps College and Carol to the University of Southern Mississippi. Preston's post-retirement activities in Kosciusko included helping establish a tutorial program called the LEAP Center and a biracial men's club called The Club. He also taught American Government as an adjunct instructor for Holmes Community College. Ever the "man in the ring," Preston ran for state Senate in 1995, an experience that allowed him to create broader and deeper bonds to the people of Mississippi. In 2009, Preston and Ann moved to Santa Clara, Utah. His activities since 2009 included teaching American Government and Introduction to Islam as an adjunct instructor for Dixie State University. He also taught courses on Islam in the Institute for Continued Learning (ICL) Program, and he was a volunteer at the VA Home in Ivins, leading discussions on current Events. He attended the Good Shepherd Presbyterian Church in St. George. Friends and family may visit the family tribute to Preston at: http://www.preston-hughes.forevermissed.com Donations in Preston's memory can be made to the LEAP [email protected] (P.O. Box 1184, Kosciusko, MS 39090. www.kfeems.org).

Preston Hughes (77) passed away in Santa Clara, UT, on May 23, 2020, after a year-long battle with Hodgkin's Lymphoma. He was the son of Preston L. Hughes (deceased), from Gladys, VA, and Mary Kate (McNeel) Hughes (deceased) from Louisville,... View Obituary & Service Information

The family of Lyttle Preston Hughes created this Life Tributes page to make it easy to share your memories.

Send flowers to the Hughes family.