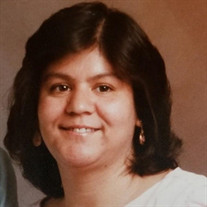 Marcella “Marci” Call Madsen of St. George, Utah, passed away peacefully on Monday, February 22, 2021 at the age of 62 from extended illnesses. She was born on July 4th, 1958 in Colonia Dublan, Mexico. She was the daughter of Harvey and Jane Call. She was raised in Provo, Utah and attended Provo High School and graduated from the Utah Trade Technical Institute, and LDS Seminary. She married her eternal sweetheart, Brian Madsen, on September 20th, 1980. Their marriage was later solemnized in the Provo Temple. She is survived by her husband, Brian Madsen, her three children, Bonnie (Devin) Houser, Westley (Lindsey) Madsen, Clint Madsen, her brothers Chuck Call, John Call, her sisters Lurinda Amott and Ondelyn Bowman, and her loving mother, Jane M. Call. She had 11 grandchildren whom she loved dearly. She was proceeded in death by her father, Harvey Call, her father in law, Lyman Madsen, and her mother in law, Marguerite Madsen. A viewing will be held on Thursday, February 25, 2021 from 6-7:00 p.m. at the Pine View Ward LDS Chapel, 595 N. 2450 E. St. George, UT. Funeral services will be held on Saturday, February 27, 2021 at 12:00 noon. at the Spanish Fork East Stake Center LDS Chapel located at 1158 E. 1240 S. Spanish Fork, UT. A viewing will be held prior from 10:30 a.m.-11:45 a.m. at the same location. Interment will follow at the Provo City Cemetery. Live streaming of the Funeral Service is https://youtube.com/channel/ UCvu-WgU_f9lB6wE2O3mpfuA Family and friends are invited to share tributes online at SerenityStG.com. Arrangements and memorial tree planting by Serenity Funeral Home of Southern Utah, 986-9100.

The family of "Marci" Marcella Madsen created this Life Tributes page to make it easy to share your memories.