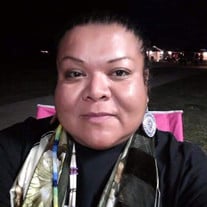 Mark Rogers “Markie” passed away November 14, 2018, at the Shivwits Indian Reservation. Markie was born February 6, 1980, in Cedar City, UT to Penny John and Glenn Rogers. He grew up on the Shivwits Indian Reservation in Ivins UT. He attended school at Santa Clara Elementary, Snow Canyon middle and high school and Chemawa Indian School, and graduated from Hairitage Hair Academy. He enjoyed working as a clerk at numerous stores. When he was younger he was a fancy dancer and traveled to many different pow wows. he started to sing with Water Deer drum group. Markie loved to play hand game, sing his traditional songs like sun dance, pow wow, Paiute round dance songs and he was the lead Salt Singer. He also liked to bead, sew, cook, and travel. He would drop what he was doing to help anyone. He will be greatly missed by all who knew him. He is survived by: his mother Penny (Clarence) John; father Glenn Rogers; sister Amy (Dominic Manning) Wall brother, Jared Wall; nieces Dakota, Toni and Ashley Rogers, Amelia Ramirez, Emma Nava and nephew Anthony Ramirez. Many aunts and uncles He was preceded in death by: grandparents Will and Dewalla Bushhead Rogers, Guy Wall and Eunice Survaior, brother Jamie Rogers, and niece Maria Ayala A half night sing will be held Sunday night, November 18th 2018, from 7:00 pm to 12:00 a.m., at the Shivwits gymnasium. An all-night sing will be held Monday, November 19th beginning at 7:00 pm. Funeral services will be held Tuesday morning, at 8:00 a.m., at the Heritage Park Branch LDS Chapel, 240 E. 1060 S. Ivins, UT. Interment will follow at the Shivwits Reservation Cemetery. Family and friends are invited to share tributes online at www.SerenityStG.com. Arrangements and memorial tree planting by Serenity Funeral Home of Southern Utah, 435-986-9100.

The family of Mark Rogers "Markie" created this Life Tributes page to make it easy to share your memories.

Send flowers to the Rogers family.