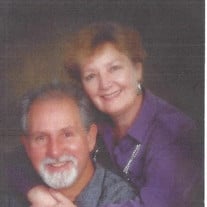 Marlene Joyce Farrand, 79, passed away on December 10, 2020, in Rockville. She was born on April 27, 1941 in Lynn, Massachusetts as the fourth child to Sterling and Louise Rand. She married John Edward Farrand in Nashua, New Hampshire on April 21, 1974. Marlene was raised between Massachusetts and Florida, graduating from Chamberlain High School in Tampa, Florida in 1959. She met and married John in 1974 and they continued to raise their seven children together. Marlene took a position with AT&T as an Account Executive, moving to Ft. Lauderdale, Florida in 1984. They resided in Florida from 1984-1990. This is where their LDS adventure started. Marlene and John then worked at the Grand Canyon, worked at a trading post in New Mexico, ending up as the owners of the El Rio Lodge in Springdale, Utah. Marlene and John ran the hotel until selling and retiring in Rockville in 2006. Marlene was an active member of the Church of Jesus Christ of Latter-day Saints, serving in many callings in the Church during her lifetime. Preceding Marlene in death were her parents, Sterling and Louise Rand, her sister Delores and brother, Sterling. Marlene is survived by her husband John with 46 years of marriage; children Steven, Susan, Jane, Phillip, Karen, Helen, and Margaret; 18 grandchildren and 10 great grandchildren. Also surviving is her sister, Sally of Tampa, Florida. Graveside services for Marlene will be held on Monday, December 21, 2020, at 2:00 pm at the Springdale Cemetery in Springdale, Utah. The family wishes to express their appreciation to the Hospise Staff for the kind and loving care they provided for Marlene during her time with them. Deepest thanks to the Virgin River Ward members and local community for all their visits, calls, cards, food, and warmest love and well wishes during this trying time in our family.

Marlene Joyce Farrand, 79, passed away on December 10, 2020, in Rockville. She was born on April 27, 1941 in Lynn, Massachusetts as the fourth child to Sterling and Louise Rand. She married John Edward Farrand in Nashua, New Hampshire on April... View Obituary & Service Information

The family of Marlene Joyce Farrand created this Life Tributes page to make it easy to share your memories.

Send flowers to the Farrand family.