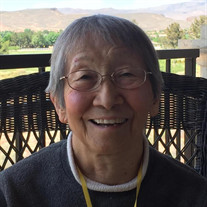 Martha Michiko Nishimoto passed away on May 26, 2020, at the Dixie Regional Medical Center in Saint George, Utah. Martha came into this world on March 12, 1930, on the family farm in Platteville, Colorado. Her parents were George and Wai (Murata) Konishi. She was the fifth of thirteen children and loved growing up on the farm, where her tomboy-at-heart nature usually led to getting into mischief with her brothers. Martha graduated from Platteville High School and attended college for two years at Colorado State University. After marrying Noble Nishimoto and settling in Denver, Colorado, she had four children and worked primarily as a dental office manager in Denver and Westminster. Martha's main calling, however, was service to family. She was a loving and caring daughter, mother, and sibling, who always put her children and other family members first. She was the primary caregiver for both her parents during their senior years. Her devotion to family was truly a wonder and an inspiration to those that knew her. Upon retiring Martha was able to cultivate two new passions while living in Westminster and Broomfield, Colorado. She loved to exercise daily and ran in the Bolder Boulder 10K race three times with family members. Her other passion was volunteering as a teacher's aide at local elementary schools. Martha spent the last ten years of her life in sunny Saint George, Utah. She had many friends and was a regular at the SunRiver fitness center. She did volunteer work at the hospital, cancer center, and soup kitchen. She moved to the Retreat at Sunbrook in late 2017. She leaves behind: her brothers Harry, Frank, Alban and Alvin; sisters Catherine, Charlotte, and Linda; children Kathryn (Robert), Delbert (Ehdi), Douglas, and Glen (Denise); and five grandchildren and two great-grandchildren. She was preceded in death by her parents George and Wai; husband Noble; brothers Ben, Gilbert and Robert; and sisters Lena and Ruby. A very special thank you to the wonderful staff at the Retreat at Sunbrook including Garrett, Dustin, Megan, Alexis, Amanda, Brian, and June. Finally, special thanks to the outstanding personnel at Dixie Regional Medical Center that eased her peacefully through the last three days of her life. They included Dr. Foster and Dr. Mecham; nurses Josh, Kaylee, Jamee, and Jake; aides Layton, Kayden, Corey, Kallan, and Mariangela; and environmental worker Ronald. Josh was especially comforting to family during her three days in the hospital and we will be forever grateful to him. Services will be held at a later date in Colorado. Family and friends are invited to share tributes/condolences online at www.SerenityStG.com. In lieu of flowers, the family is requesting that donations be made in Martha's memory to the donor's favorite charity.

Martha Michiko Nishimoto passed away on May 26, 2020, at the Dixie Regional Medical Center in Saint George, Utah. Martha came into this world on March 12, 1930, on the family farm in Platteville, Colorado. Her parents were George and Wai (Murata)... View Obituary & Service Information

The family of Martha Michiko Nishimoto created this Life Tributes page to make it easy to share your memories.

Send flowers to the Nishimoto family.