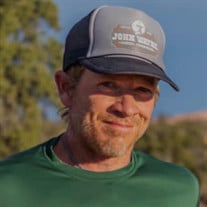 With a heavy heart, we announce the passing of Matthew Stephen Gunn on October 18, 2020. He was born June 10, 1976, to Spencer & Christine Gunn. Matt had a heart full of concern for his fellow man. He looked for and believed in the best in others. So many benefitted from his kind, giving ways. The most significant portion of his heart, though, was reserved for his children. They were his life and greatest concern. He cherished time with them and strove to make their moments together special. His children are a blessing that came to his life through his marriage to Danika Larsen Gunn. They were later divorced. Matt was a humanitarian who served others, even when it meant sacrificing his comfort and ease. This love of serving began on his mission to the people of Ecuador for the Church of Jesus Christ of Latter-Day Saints from 1995-97 and is what he held onto from that experience. He devoted his life to teaching and helping those who were not as fortunate as him. He spent many years teaching elementary and Spanish in Ogden, Logan, and St. George, Utah. He found joy in seeing others improve their circumstances. This desire was at the core of who he was and led to his work developing and providing self-sustaining living solutions, including building an orphanage in Haiti after the earthquake devastations of 2010 and later helped with rebuilding hogans for the people of Monument Valley. Matt was constantly and quietly serving others throughout his adult life. The second of eight children, Matt was a beloved son and brother. He took that role seriously and often included his family in his adventures through life, and the life of Matt Gunn was certainly full of adventure. He was always going/doing and fit so much LIFE into his 44 years. He began exploring the outdoors with his father at a very young age, and it wasn't long before Matt was hooked. You name it -- hunting, fishing, camping, biking, hiking, trail running, climbing, skiing -- they became his passion. His exploration of the Utah backcountry was extensive and is where he found peace in life. He loved to share his knowledge and experience with anyone who dared try to keep up with him. This led to his competing in and producing several ultra-marathons. He established the Grand Circle Trail Series, which offered ultramarathon competitions purposely staged in or near some of Utah's most breathtaking scenery, specifically Zion, Bryce, Antelope Canyon, Monument Valley, Grand Canyon, Capitol Reef, the Tushars mountain range, and culminated with Trailfest. These races allowed him to share his passion for Utah's majesty and beauty with thousands of athletes from around the world and led to many cherished friendships. It also led him to meet his companion in love and adventure, Toby Langmann Gunn, in 2016. After Matt and Toby spent time with the Tarahumara people of Mexico, Matt's dream was to be married in the Copper Canyon with the people they came to love. His dream came true, and they were married on March 2, 2017, and experienced a whirlwind of adventures in their life together. Matt is survived by his children Abraham, Lia, Hazel & Olive Gunn, his wife Toby and stepchildren Paileigh and Taden, his mother and stepfather Chris and Rand Beacham, his siblings Josh (Heidi), Rachelle (Curtis) Koch, Ben (Katie), Mark (Allie), Zack (Ashlee), Adam (Samantha), and Sarah (Adam) Bishop, as well as 31 adoring nieces and nephews. Matt was preceded in death by his father, Spencer H. Gunn. Funeral services will be held Monday, October 26, 2020, at 11:00 am at the chapel at 1706 Desert Dawn Drive, Santa Clara, UT. Social distancing and masks required. The funeral service will be live streamed via Zoom. https://zoom.us/j/94663602924?pwd=akRmQkhYdFJ3MHZaTzFBdjR4ZWRldz09 Meeting ID: 946 6360 2924 Passcode: 889760

With a heavy heart, we announce the passing of Matthew Stephen Gunn on October 18, 2020. He was born June 10, 1976, to Spencer & Christine Gunn. Matt had a heart full of concern for his fellow man. He looked for and believed in the best in others.... View Obituary & Service Information

The family of Matthew Stephen Gunn created this Life Tributes page to make it easy to share your memories.

With a heavy heart, we announce the passing of Matthew Stephen...

Send flowers to the Gunn family.