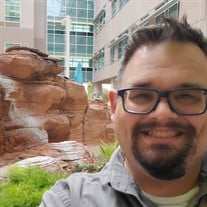 Matthew Sevald, 38, passed away after a short illness on Wednesday, May 19th, 2021 in St. George, UT. He was born November 9th, 1982 in Detroit, MI to Paul Sevald and Eileen Alvarez. Matt graduated from Catholic Central High School in 2000. In high school he enjoyed being in the band where he played the trumpet. After high school he joined the Marines where he was deployed to Iraq. He was medically discharged due to an injury. On June 1st, 2006 in San Antonio, TX he married Eva Thomas. They later moved from San Antonio to Northville, MI. After the birth of Peter they moved out to St. George, UT where he was a Dispatcher for the Police Department. He then decided to go to school to be a nurse of which he worked at Dixie Regional Medical Center until his recent illness and passing. Matt's hobbies included Shooting firearms, Playing World of Warcraft, Tabletop gaming, Coaching his children's sports teams, and Belegarth Medieval Combat Society. He enjoyed volunteering with Peter at Boy Scouts and attending Trinity Lutheran Church. He is preceded in death by his loving wife, Eva Marie, 16 months earlier. He is survived by his children Peter James (14), Lillian Marie (12), Charlotte Ruth (4), and Jonathan David (2); father Paul (Claudia) and mother Eileen; brother Andrew (Jennifer); sister Claire; in-laws Harold, Carol, and Donnie; sister in law Kate (Darren); brothers in law Andrew, Steven, and Bradley (Jayla); and many cousins, nieces, and nephews. The family would like to thank the entire staff of Dixie Regional Medical Center. All of the friends who have rallied around the kids, Trinity Lutheran Church and Academy, and the Serenity Funeral Home. In lieu of flowers the family requests prayers for peace, acceptance, and for the grandparents to be the best guardians possible for their children in a way which honors Eva and Matt and keeps their memory alive. The Funeral Service will be held on Thursday, May 27th, 2021 at 12:30 pm at Trinity Lutheran Church, 2260 Red Cliffs Dr. St. George, UT. Military Rites will follow at Middleton Park across the street from the grandparents at 787 N 1700 E, St. George, UT.

Matthew Sevald, 38, passed away after a short illness on Wednesday, May 19th, 2021 in St. George, UT. He was born November 9th, 1982 in Detroit, MI to Paul Sevald and Eileen Alvarez. Matt graduated from Catholic Central High School in 2000.... View Obituary & Service Information

The family of Matthew Lyle Sevald created this Life Tributes page to make it easy to share your memories.

Matthew Sevald, 38, passed away after a short illness on Wednesday,...

Send flowers to the Sevald family.