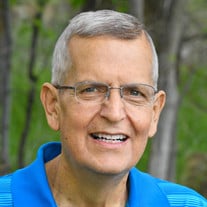 Matthew Staheli, 63, died peacefully at home on July 18, 2019 from liver disease. He was born November 9, 1955 to Karl and Carita (Jones) Staheli. Matt grew up in Richfield and St. George before serving a full-time mission in the California Sacramento Mission, where his testimony and love of Christ became the cornerstone of his life. After his mission, Matt returned to work at Dixie Hospital. His first day back, he met his eternal companion, Susan Snow. They were married in the St. George Temple on July 15, 1977. They spent the next decade going to school. Matt graduated in nursing from Weber State, and went to school to become a Certified Registered Nurse Anesthetist in Canton, Ohio. His first job out of school was in Ogden. They then moved to Payson, and finally to Cedar City where Matt worked as an anesthetist for the past 26 years. Matt had a great blend of professional skills and a calm, gentle and kind demeanor. He was described by one patient as “a man who truly has his halo on straight.” Matt had a deep and abiding love for his Savior, Jesus Christ. Matt served as a bishop, both of an SUU student ward and most recently for his beloved Fiddlers Canyon Ward. He also served in two stake presidencies. He had a special love for the youth and children of the church. In all of his callings, he loved both the people he served and those with whom he served. His playful spirit endeared him to many, but he also had no problem being forthright when the occasion warranted. He is remembered by family, friends, patients, colleagues, ward and stake members, and total strangers for his kind heart, quick wit, and gentle soul, and as someone who sought to ease pain wherever he found it. Matt and Sue were blessed with five wonderful children, of whom he was very proud. He loved spending time with his kids, golfing (mostly laughing), scuba diving, travelling, and working in his workshop. His favorite holiday was Thanksgiving when he was surrounded by family and friends. He is survived by his wife, Sue, his children, David, Sara, Daniel (Jenny), Jacob (Whitney), and Rachel, his two grandchildren James and Avery, and his brothers Allen (Suzanne), Ron (Jan), Howard (Francelle), and eleven nieces and nephews. He was preceded in death by his parents, his sister Karla, and in-laws George and Lily Mae Snow. Visitation will be held at the Canyon View Stake Center, 1985 N. Main, Cedar City on July 26, from 6-8 PM and July 27 from 9:30-10:30, with the funeral to follow at 11:00 AM. Interment will be at 2:30 at the Enterprise Cemetery. In lieu of flowers, please consider making a donation to the Church of Jesus Christ of Latter-day Saints Humanitarian fund. The family wants to thank Dr. Todd Garrett, his M.A. Jen, the wonderful staff of Intermountain Hospice, especially Bob and Becky, and the liver team at IMC. (ETSO)

Matthew Staheli, 63, died peacefully at home on July 18, 2019 from liver disease. He was born November 9, 1955 to Karl and Carita (Jones) Staheli. Matt grew up in Richfield and St. George before serving a full-time mission in the California... View Obituary & Service Information

The family of Matthew Staheli created this Life Tributes page to make it easy to share your memories.

Send flowers to the Staheli family.