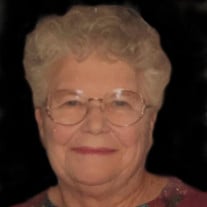 Maureen Swapp Driggers Huntsman of Diamond Valley/St George, Utah, passed away at the age of 85 on June 8, 2021 surrounded by family in her home. She was born September 6, 1935 in her grandfather’s house in Overton, Nevada to Alex Ether Swapp and Sarah Geneve Reiser. She grew up in Overton, Nevada and graduated in 1953 from Moapa Valley High School. Then she attended Dixie College in St George, Utah for a year. Then she moved to Las Vegas and began working at the Bank of Nevada. Four years later she married Dick Driggers on March 16, 1956, and moved to LA where she continued her banking career. They were blessed with three children Carol Ann Burgess (Tim), Karen Geneve Driggers, and Tom Pressley Driggers (Lori). In 1981, after 25 years of marriage, they divorced and Maureen became a single parent of three teenagers. About four years later she started working at LDS Family Services and continued working there until her retirement in June of 2000. She enjoyed the many years working with unwed mothers and adoptive couples, helping create eternal families. In 1995 Maureen married Sheldon Huntsman, her former Bishop. She lived the last 20 years of her life in Diamond Valley. Music was an integral part of her life. In 1952 she took her first voice lesson, and said her teacher Ruel Smith helped her nurture the deep abiding love of music and the knowledge that music is one of the most inspiring forces on earth. In high school she was busy with her studies, plays, operettas, etc. She always earned superior ratings. She also played the French horn from 5th grade through 12th grade. As an adult she taught music and piano for many years. After a particularly successful night performing in the Mormon Choir, Maureen later expressed, “It is such a thrill to sing and be able to pour out your heart to God in song.” Maureen directed many choirs over the years including the las Vegas temple dedication temple choir, multi-area choir (250 boys choir at the Thomas & Mack Center in Las Vegas), North Las Vegas Stake, Las Vegas Central Stake Conference Choirs, Stake Men’s Choir, Singing Mother’s Choir, Las Vegas 13th Ward Choir (for 34 years), Morning Sun Ward Choir, and the Diamond Valley 2nd Ward Choir. Maureen was a baptized member of The Church of Jesus Christ of Latter-Day Saints and was fully engaged in her church callings where she served as Junior Sunday School organist, Relief Society President, stake primary chorister, St George and Las Vegas temple organist, and genealogy home teacher. She enjoyed working in the temple. Maureen also loved to camp, ride horses, and do genealogy. She’s preceded in death by her sister Nelda Messer, husband Sheldon Huntsman, and grandson Adam Liston. She’s survived by her brothers John Swapp and Glen Swapp, her three children: Carol Burgess (Tim), Karen Driggers, Tom Driggers (Lori), nine grandchildren: Ryan Burgess (Tassia), Jordan Burgess, Logan Burgess, Laci Horsley (Justin), Brandon Kryk, Zachary Kryk, Thomas Driggers ll (Kyrie), Kellsie Adney (Ty), Dylan Driggers, and four great grandchildren: Bently Burgess, Colbie Burgess, Everly Burgess, and Damien Adney. And there are two more great grandchildren on the way. She loved all of her family dearly. Through her trials in life, she never wavered. When reflecting back on her life, Maureen said, “The Lord has been so good to me. I wonder if I’ll ever live to be worthy of just one of the many great blessings he has given me.” Maureen was a gracious lady who was loved by all and will be missed dearly. Funeral services Friday, June 11, 2021 at the Diamond Valley 2nd Ward LDS Chapel. Viewing 10:00am – 11:00am. Funeral services 11:00am – 12:00pm at the Diamond Valley 2nd ward chapel, 1784 N Diamond Valley Rd, St George, UT 84770. Interment to follow at the Pioneer Hill Memorial Cemetery in Overton, Nevada.

Maureen Swapp Driggers Huntsman of Diamond Valley/St George, Utah, passed away at the age of 85 on June 8, 2021 surrounded by family in her home. She was born September 6, 1935 in her grandfather&#8217;s house in Overton, Nevada to Alex Ether... View Obituary & Service Information

The family of Maureen Swapp Huntsman created this Life Tributes page to make it easy to share your memories.

Send flowers to the Huntsman family.