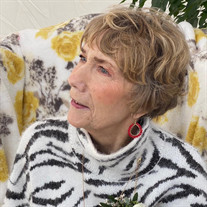 Mavis Campbell Madsen Dodson was born on August 5, 1937 to parents Merlin and Manila Campbell. She shared entrance into this life with her twin brother Mavin, joining older siblings Ralph, Fae, Albert, and Kay. Fittingly named after the Song Thrush referenced by poets (including Robert Browning and George Orwell) Mavis was as naturally melodious and carefree as a bird sitting aloft, pouring her lovely song and soul into the world. When she was still a little girl, her wise mother taught her that it was better to be interested than interesting—and though Mavis was ever captivating with her colorful scarves and witticisms, she surely did master the rare art-form of being interested. Among Mavis’ many interests were literature and the arts, dancing and athletics, gardening, philosophy and religion; but most and rarest of all—in people! She noticed, valued, befriended and sought sincere connections with anyone fortunate enough to cross her path. Mavis could make a lifelong friend while perusing the produce in the market, dining at a restaurant, hiking a trail in Zion, or riding the Greyhound Bus from Salt Lake to see her beau J.R. In the late 1950’s, while visiting Zion for the summer, Mavis cheekily interrupted a competitive ping-pong match between brothers. After handily defeating the younger one at his own game, and sashaying away with his heart, she thereafter became Mrs. J.R. Madsen when on June 24, 1960, she married her former ping pong opponent in the Logan LDS Temple. This darling duo went on to become the parents of 9 children, 26 grandchildren, and 9 great grandchildren with one more currently on the way— all equally adored and adoring. To all these children and posterity she has had an incalculable and profound effect. But her positive influence also extended far beyond the walls of her own home. In her beloved Zion Canyon community, Mavis worked at Springdale Elementary for three decades, doing what she did best: caring for, reading to, playing with and building up children in the capacities of school secretary, librarian, nurse, and teacher’s aide, and in numerous other roles. She was devoted to every student, parent, volunteer, fellow educator and co-worker who walked through the doors. With her talents and opportunities for meeting new people, Mavis was an extraordinary ambassador for the school; she would invite talented people from all over the world including artists, musicians, and scientists to visit and enlighten the students. She set up exciting reading initiatives—including one which eventually rewarded students by seeing their Principal, Stephen Eberhard, skydive from an airplane; followed by her own skydive over the West Temple a year later. Each day was a new opportunity to serve and to look good while doing it in a perfectly coordinated outfit. Mavis was a natural entertainer, a captivating orator and teacher, and an instinctual comedienne. She was an extremely involved and influential member of her community where she cheerfully served on committees, chaired on councils, accepted awards, spear-headed fund-raisers, built up libraries, planted trees and gardens, sang in choirs, taught in Sunday school—always with a sparkle in her eye, and an unfeigned and contagious enthusiasm. Mavis had an unwavering and heartfelt faith, but also a respect for all beliefs. She was never threatened or agitated by different viewpoints; but recognized truth and sincerity in everyone, and was as slow to anger as she was quick to compliment. She was the wind in everyone’s wings as she truly wished us all to soar. A peacemaker and an unfaltering lover of life, Mavis departed this earth on February 27, 2021, leaving it a much better place than she found it. Like the little Mavis bird, her distinctive song oft repeated to all she met, was one of joy and love, good humor and hope. She is survived by devoted husband Ron Dodson; adoring children Melanie Madsen, J. Richard Madsen (Sheralyn), Holly Rowland (Paul), Kristina Madsen, Lise Jones (Wayne), Christopher Madsen, Ticia Harding (Mike), Heidi Lee (Zachary), Jeremy Madsen (Whitney) and darling grands; and loving brothers Ralph, Albert (Coy) and Mavin. Beyond this veil, Mavis is reunited with father, mother, sister Fae, brother Kay and eternal sweetheart J.R. Funeral services will be held on Saturday, March 6, 2021 at 11:00 a.m. at the Springdale LDS Chapel located at 1584 Zion Park Blvd. A viewing will be held prior at the same location from 9-10:45 a.m. Interment will follow at the Springdale City Cemetery. For live stream of the Service, follow the link below: https://zoom.us/j/97567421961?pwd=UXppMjVndHd2aUFwSmRTWEVVTG5ldz09 Meeting ID: 975 6742 1961 Passcode: 147068

The family of Mavis Campbell Madsen Dodson created this Life Tributes page to make it easy to share your memories.

Mavis Campbell Madsen Dodson was born on August 5, 1937 to parents...