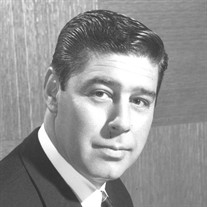 Max D. Tolbert passed away peacefully at home in the early morning of November 30, 2019. He was born on February 13, 1930, to James Clifford Tolbert and Edith Bell Brookens in Fayetteville, PA. He moved to Salt Lake City, UT after high school and attended Brigham Young University where he played defensive end on the football team, he met the love of his life Kathlyn Robertson (Tolbert), and later married on January 1st, 1952. They were sealed in the St. George Temple of The Church of Jesus Christ of Latter-day Saints in 2003. Max and Kathy lived in Salt Lake City for three years. Max coached football at Murray High School, and after winning the State Championship at Murray High School, Max was offered and accepted a job coaching football at BYU. Max and Kathy then moved to Provo. After living in Provo for six years, Max accepted a position with Crown Zellerbach Corp. Max and Kathy moved to San Francisco, until Max was promoted and transferred to Minneapolis, Minnesota. They lived in Minneapolis for 7 years and had 2 sons over that time, Gregg and Scott. After living in Minneapolis, Max was transferred to San Francisco for three years and then to Southern California, where Max and Kathy resided for 20 years in Fullerton. In 1995, Max and Kathy retired and moved to St. George. Max enjoyed watching BYU play football, reading, and golfing. He loved his family and was excited every time they came for a visit. In 2018, Max was struck with grief when Kathy passed away of dementia and later Parkinson’s disease, the family is in deep sorrow of his passing but finds comfort knowing he is with Kathy now. Max is survived by: his beloved sons, Gregg Tolbert of Anaheim, California and Scott (Dion) Tolbert of Santa Clara, Utah; granddaughter, Kelsey Reilly (Jerry Steed) of Washington, Utah; and great-granddaughter Maggie Jo Steed of Washington, Utah The family would like to give a special thank you to Bernadette McCafferty for taking care of him until the end. Funeral services will be held Thursday, December 5th, 2019, at 11:00 a.m. at the Sunset LDS 10th Ward Chapel, 820 North Valley View Drive, St. George, UT. Interment will be at the Spanish Fork City Cemetery. Family and friends are invited to share condolences online at www.SerentiyStG.com. Arrangements and memorial tree planting by Serenity Funeral Home of Southern Utah, 986-9100.

Max D. Tolbert passed away peacefully at home in the early morning of November 30, 2019. He was born on February 13, 1930, to James Clifford Tolbert and Edith Bell Brookens in Fayetteville, PA. He moved to Salt Lake City, UT after high school... View Obituary & Service Information

The family of Max Tolbert created this Life Tributes page to make it easy to share your memories.

Max D. Tolbert passed away peacefully at home in the early morning...

Send flowers to the Tolbert family.