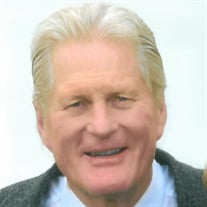 Devoted father and husband Merlin Terry Ahlquist, 78, passed away Monday, February 11th 2019 at his care facility, BeeHive Homes, in St. George Utah peacefully with family by his side. Terry was born June 24, 1940 in Salt Lake City, Utah to Merlin and Ann Ahlquist. As a child he grew up in Garfield and loved to ride bikes, climb the hills behind his home and play on the old Kennecott copper mine train tracks. Terry graduated from Granite high school and played on the basketball team during his high school years as point guard. After graduating high school Terry served a full time mission for the Church of Jesus Christ of Latter Day Saints in southern California. Returning from his mission Terry continued his education at the University of Utah getting his bachelor's degree in Electrical Engineering, where he eventually started his career working for Unisys for 20 years and met the love of his life; his wife Concha Marie Bosshardt. Terry moved on in his career working for Novell and then finishing his career as an educator teaching at East high school, the Utah Department of Corrections in Gunnison and lastly at Snow College South where he then retired. Terry started his life in the Salt Lake area and gradually moved further south as he got older, first moving to Redmond Utah, then retiring down in St George Utah. Terry was very athletic and loved all sports especially golf, basketball, bowling, racquetball and tennis. He also loved the outdoors and grew up hunting with his father and also loved riding four wheelers on the beautiful trails of Utah. Terry is survived by his wife Concha Marie Bosshardt and his five children Terena Devashrayee, Bryce Payne, Mindy Pratt, Niki Sampson, Cody Ahlquist; grandchildren; sisters Merann Hegemann and Pam Jensen; and many many friends. He was preceded in death by his mom and dad Ann and Merlin Ahlquist and his son M Terry Jr. Ahlquist. Our family would like to give a special thanks to the wonderful Nurses, CNA's and staff at BeeHive Homes and to all the family members who provided invaluable care to Dad towards the end of his life. Memorial services will be held at 11:00 a.m. Saturday, February 16, 2019 at Santa Clara 1st Ward 3040 Santa Clara Drive.

The family of Merlin Terry Ahlquist created this Life Tributes page to make it easy to share your memories.

Send flowers to the Ahlquist family.