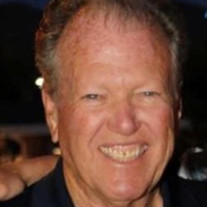 Michael Kenneth Hardy, partner, father, grandfather, friend, left for the beautiful golf course in heaven on Thursday, July 1, 2021, at the age of 77 years old. Mike was a true example of resiliency. He fixed the things he could and moved forward with the things he could not change. When he learned his cancer was terminal, he simply said, there are some things I need to get in order. He made a “to do” list and checked them off. He spent every moment with family and friends, created memories in his new pool, hosted a pool party for all his golf family, his home became the “19th hole”, completed chores including replaced the water heater just because it should be the next appliance to go, went golfing one last time and most importantly told his loved ones I LOVE YOU every chance he had. Mike was born April 9, 1944, to Kenneth and Jean Hardy in Salt Lake City, Utah. He graduated from Olympus High school and enrolled eight years in the Army Reserves. He married Dianne Wilson in 1964, later divorced. Together, they raised 3 children KayLynne, Julie and Kenny. Mike was the best dad and devoted to his children. He lived for family-time, which was typically spent camping, boating and playing in the family pool. As the kids grew older, he made a point to keep the family together. They spent the next 25 years making memories together at Pineview Reservoir and an annual Lake Powell trip. His grandchildren will forever remember him for his love of boating and ice cream. Mike retired from General Electric in 2006, after 40 years. He started his career on the loading docks and worked his way to be a MASTER salesman. His career took him to San Francisco and Seattle. In the last year at GE, he was recognized as a Top Vendor by Ivory Homes. This award was a direct reflection on the work ethic Mike lived by, “You get it done.” Mike found true love and companionship later in life. In 2009, Mike met Diane Johnson. Together they built a perfect life spending time with family and friends. In 2013, they sold their homes in Taylorsville and Bountiful and moved to Sun River, St. George full-time. There they had a wonderful group of friends. Their social calendar was always full of dinners, cards, and time spent with friends. Mike was the secretary of the Sun River St. George Men’s Golf Association as well as his Sunday group. “He brought organization and a lot of new games that the group may never see again.” In loving memory, the Sunday group will forever be known as the Mike Hardy Sunday Golf Group. Mike, Dad, Grandpa, friend will be missed dearly by all who knew him. Mike leaves behind partner, Diane Johnson, his three children, KayLynne Bischoff, Julie (Caryn) Hardy and Kenny (Kristie) Hardy. Also, Diane’s three children Cari (Neil) Moss, Melyn (Farel) Osmond, Paige (Brett) Porter, combined 14 grandchildren, and 10 great grandchildren. Proceeded in death by both his parents, a stillbirth son and former wife Dianne Hardy. In honor of Mike’s final wishes we will be hosting 2 celebrations of life, one in Salt Lake at the River Oak Golf Course, 9300 Riverside Dr., Sandy UT 84070 on July 17th, 2021 at 1-4pm. The other in St. George, in the ballroom at the SunRiver Community Center, 4275 S. Country Club Drive, 84790 on July 31st, 2021 at 1-4pm.

Michael Kenneth Hardy, partner, father, grandfather, friend, left for the beautiful golf course in heaven on Thursday, July 1, 2021, at the age of 77 years old. Mike was a true example of resiliency. He fixed the things he could and moved forward... View Obituary & Service Information

The family of Michael Kenneth Hardy created this Life Tributes page to make it easy to share your memories.

Send flowers to the Hardy family.