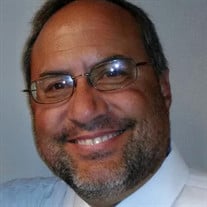 Santa Clara, UT – Michael B Legg, age 56 was tragically killed in a car crash on Saturday, May 26, 2018. Mike was born on December 10, 1961 in Wichita Falls, Texas to Landis and Rhona Legg. He married Brenda Crofts Reep of Santa Clara, Utah on February 29, 2016. Mike is the oldest of 9 children and spent his early years in Portland, Oregon. When he was 14, the family moved to Washington, Utah where he graduated class of 1980 at Dixie High School. He is loved by all his classmates. He married Lori Moss on November 19, 1981 in Star Valley, WY and had five beautiful children – four boys and one girl. Mike earned his Bachelor’s Degree in English Composition and worked 25 years as a UPS driver. In 1996, he moved his family back to Washington, Utah. He later divorced in 2012, and four years later finally met the love of his life. Mike was a very spiritual and devoted member of The Church of Jesus Christ of Latter-day Saints. He possessed a strong testimony and was so very close to the Spirit. He especially enjoyed his church callings as primary teacher and working with the scouts. He had an infectious, beautiful smile which he inherited from his mom and passed down to all his children. Mike had an amazing and beautiful singing voice that will be greatly missed by all who knew him. He loved people and was always cheerful and friendly with everyone who came in contact with him. Mike was a loyal and devoted fan of the Green Bay Packers and put his heart and soul into the sport of watching Aaron Rodgers. He spent this past year working as a Certified Nurse Assistant and transportation at the Southern Utah Veteran’s Home in Ivins, Utah. He was loved by all the residents and his co-workers and will be greatly missed. Mike is survived by his wife, Brenda (Santa Clara); his children, Michael Legg, Adam (Cassidy) Legg, Jason Legg, Derick (Amanda) Legg and Katie Legg – all of St. George, Utah; Six grandchildren – Jaxan, Beckham, Taylee, Kendall, Jordan, Kapri; His parents, Landis and Rhona Legg; His siblings, Launa (Wally) McIntyre, Andrew (Betsy) Legg, Rick (Theresa) Legg, Scott (Kari) Legg, Troy (Molly) Legg, Timothy (Terra) Legg, Tina (Willard) Pack and Amy (Jason) Groesbeck. He is also survived by many nieces and nephews who absolutely love and adore him. Additionally, due to his marriage to Brenda, he is survived by step-children who love him and greatly appreciate his part in their lives. Richard (Shannon) Reep of Enterprise, Utah, Robert Reep of St. George, Ryan Reep of Layton, Utah, Rianna (Jamon) Mysliwiec of Evanston, WY, Rustin Reep of St George, and Rachel Reep of Santa Clara. Seven step-grandchildren who loved visiting “Papa Smurf.” Five extended step-children of Brenda’s; David (Carmen) Reep of Salt Lake, Richard (Meggan) Reep of Salt Lake, Aaron (Sherry Ann) Reep of St George, Mary (Tyler) Fuller of Salt Lake, Amy (Dave) Phillips of Salt Lake. And many more step-grandchildren. Mike was preceded in death by his grandparents, Homer & Myrna Legg and Wilford and Afton Hokanson, and one step-daughter, ReNee’ Reep. Funeral services will be held on Monday, June 4, 2018 at the LDS Chapel at 3815 Rachel Drive in Santa Clara. Visitation will be from 9-11 am and the funeral will be held at 11:30. Interment will be in the Santa Clara Cemetery. Family and friends are invited to share condolences online at www.serenitystg.com.

Santa Clara, UT &#8211; Michael B Legg, age 56 was tragically killed in a car crash on Saturday, May 26, 2018. Mike was born on December 10, 1961 in Wichita Falls, Texas to Landis and Rhona Legg. He married Brenda Crofts Reep of Santa Clara,... View Obituary & Service Information

The family of Michael B Legg created this Life Tributes page to make it easy to share your memories.

Send flowers to the Legg family.