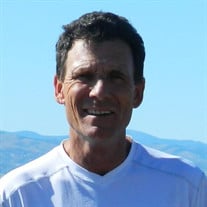 St. George, UT - With his family by his side, Michael John Pender age 61 passed away due to health issues on October 4, 2021, in St. George, UT. He was born April 28, 1960, in Oak Harbor, WA, US Naval Air Station to Joan Gertrude Riley Pender and Glenn Edward Pender. He married Christina Lynn Vanetti in South Lake Tahoe, CA on May 30, 1992. Michael was raised in Dixon CA where he graduated high school. He also completed an Industrial Maintenance Certificate Program in 2016 at Dixie Technical College in St. George Utah. He also lived in Olympia WA before moving to St. George Utah in 2006. Michael’s lifelong career was in the Industrial Maintenance/Construction field. Michael was very clever with mechanics and enjoyed repairing things for family and friends as well. Mike’s work was never done, and he thrived when he had a project. He enjoyed riding and fixing motorcycles, swimming and throwing football with his boys. He loved watching his boys play football, basketball, track and soccer and did his best to be at every game. He enjoyed taking his family on vacations and just spending time with family in general. He was a lifelong 49er’s fan and loved to watch the Sunday night games with his family. He loved animals and was good with rescues, winning their trust through patience, walking, petting and treats. Michael is survived by: his wife Christina Lynn Pender; and their two sons Robert Michael Pender aka Bobby, 20 and Joseph Alexander Pender aka Joey, 14; 2 children from previous marriage, Matthew John Pender, his wife Leah Pender, their two children, Melissa Pender-Gschwend, her husband Sanford Gschwend, their two children; his mother Joan Riley Swafford; and his siblings Cindy Patrick, Patricia Pender, and Glenn Pender. He was preceded in death by: his father Glenn Pender; and stepfather Robert Swafford who raised him. Michael idolized Bob Swafford and called him dad. Michael drove diesel trucks and harvesters, learning so much from Bob through the years. Bob helped make Mike the hard working, dedicated man that he became. We’d like to thank Nurse Kim Schuman (our good neighbor) and the staff at IHC for their effort and support. We really appreciate the love, kindness and support we’ve received from our extended family, friends, and neighbors in our time of grief. A special thank you to Michael’s youngest son Joey for his amazing effort in initiating lifesaving skills in an effort to save his father. His mother and brother are eternally grateful for his gallant efforts. A memorial service will be held to celebrate Mike’s life on Saturday, October 23, 2021, at 1:00 p.m. at the Bloomington Hills 10th Ward LDS Church, 1222 East Brigham Rd, St. George, UT. In lieu of flowers, we ask that donations be made to the Best Friends Animal Sanctuary or ASPCA. Mike will be extremely missed by his family and friends who knew, loved, and respected him. Family and friends are invited to share tributes online at: www.SerenityStG.com. Arrangements and memorial tree planting are under the direction of Serenity Funeral Home of Southern Utah, 435-986-9100.

St. George, UT - With his family by his side, Michael John Pender age 61 passed away due to health issues on October 4, 2021, in St. George, UT. He was born April 28, 1960, in Oak Harbor, WA, US Naval Air Station to Joan Gertrude Riley Pender... View Obituary & Service Information

The family of Michael John Pender created this Life Tributes page to make it easy to share your memories.

St. George, UT - With his family by his side, Michael John Pender...

Send flowers to the Pender family.