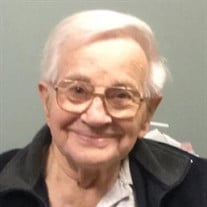 Santa Clara, UT Montague Leonard Blake, 90, passed away on June 30th, 2019 from complications of old age. He was born November 5th, 1928 in Devonport, England to Mabel Beatrice Williams and Montague Harold Blake. He married Pamela Joyce Marlow in Plymouth, England on November 26, 1949. Monty was raised in Plymouth, England. He dropped out of school at age 14 to help his older brother Bill, support their widowed mother. He lived in the Plymouth area until 1999 when he moved to Santa Clara, Utah to live with his son Matthew and his family. Monty was in the Royal Air Force during World War II as ground crew, where he prepped the engines to be installed in Lancaster Bombers and the Spitfire. After the war he worked in the Plymouth dockyards as an electrician’s mate on war ships. In order to give his children a better life, he moved his family to the countryside in nearby Plympton, England, where he worked as a dairyman on a dairy farm. Monty worked at the dairy farm until ill health forced him into early retirement in the early 70’s. In the early 80’s he took a part-time job driving produce runs for a wildlife park. He worked that job until shortly before moving to America. Early in their marriage, Monty and Pam joined the Church of Jesus Christ of Latter-day-Saints. They were sealed in the temple and remained faithful members for the rest of their lives. In his retirement years Monty enjoyed helping take care of his grandchildren and helping out around the house. He enjoyed books and movies about World War II, listening to a wide range of music, collecting model cars and coloring. He is survived by his brother William Blake, by seven of his ten children, Michael (Shirley) Blake, Mark (Yvonne) Blake, Melaine (David) Gillings, Melissa (Keith) Cole, Melinda Blake, Matthew (Patricia) Blake, and Michelle (Trevor) Scott. His progeny includes 34 grandchildren and 41 great-grandchildren with three more expected this year. He was preceded in death by his parents Montague and Mabel Blake, his wife Pamela and his children, Margaret Blake, Malcom Blake and Marina Dean. The family would like to thank Red Cliffs Health and Rehabilitation Center, and Encompass Health – Hospice for their excellent care. He enjoyed visiting with them all, sharing his music and telling them his stories. Funeral services will be held Wednesday, July 3rd at 11:00 am at the Church of Jesus Christ of Latter-day Saints at 3680 Pioneer Pkwy, Santa Clara, UT. A visitation will be held at 9:30 am prior to the service. Interment will take place at the Santa Clara Cemetery.

The family of Montague Leonard Blake created this Life Tributes page to make it easy to share your memories.

Montague Leonard Blake, 90, passed away on...

Send flowers to the Blake family.