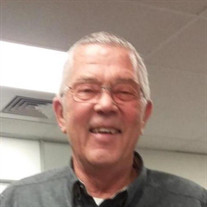 Monty Edward Hollie, age 73, passed away unexpectedly on June 11, 2021. He found a home in the St. George area, rich with friends and community that he adored for over 15 years. He fulfilled many roles in his family and professional life: none more important to him than being a devoted husband, father and friend. Monty was born on October 8, 1947 in Monterey Park, California to Manuel and Audrey Hollie. He was the oldest of his three siblings Ronnie, Connie and Terry Hollie. Monty was blessed with an eagerness to get involved, and a need for human connection with those around him. He served in the United States Navy, and later found a career in sales and management that allowed his character and personality to shine brightest. When he wasn’t busy making the day successful, he was known to draw smiles and laughter with a legendary sense of humor and an aptitude for story-telling. Throughout his days, to the people and places he has been, many will simply know him as “The Great Flying Wally” and having a love for sunsets. He is survived by his wife Kimberly, his three sons, Daniel, Matthew and Nicolas, and his grandson Luke Hollie. The family would like to thank all of his friends across the country, his friends in St. George, Utah and everyone at Westland Construction, Consolidated Electrical Distributors, Buck’s Ace Hardware, and his friendship with the Church of Jesus Christ of Latter Day Saints for filling Monty’s life with loving support, family and community. Contributions in memory of Monty can be made to the Arbor Day Foundation (arborday.org) by planting a Tree-In-Memory in his honor. Celebration of Life will be held at a later date.

Monty Edward Hollie, age 73, passed away unexpectedly on June 11, 2021. He found a home in the St. George area, rich with friends and community that he adored for over 15 years. He fulfilled many roles in his family and professional life:... View Obituary & Service Information

The family of Monty Edward Hollie created this Life Tributes page to make it easy to share your memories.

Send flowers to the Hollie family.