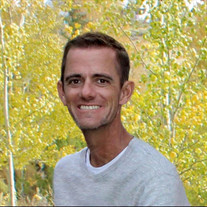 Morgan Lee Gubler, 39, passed away with his wife by his side on January 30, 2021 at the National Institute of Health in Bethesda, Maryland after a valiant battle with the effects of CGD. Morgan was born November 9, 1981, the fourth of five children, to Lamar and Doris Poll Gubler. He spent his childhood in La Verkin, UT, and graduated from Hurricane High in 2000. He served a two year mission for The Church of Jesus Christ of Latter Day Saints in Seattle, Washington. He graduated from Dixie State College with a degree in Business Administration, and went on to become a Vice President/Branch Manager at Cache Valley Bank Southern Region. On November 11, 2006 he married Kristina Jorgensen in the Idaho Falls, ID Temple. He always had a knack for making good decisions. Together they have four children. Morgan spent his life building respect. As he respected others, they respected him in return. Whether colleagues, competitors, customers, friends, or family, he earned their trust, and they looked up to him. He led by example, grounded in his faith, and his kids and others were watching. Morgan also spent his life building relationships. This was his gift. His natural way was to focus on others, and not draw attention to himself. Instead, people were drawn to him, and everywhere he went, they flocked to him. Whether on the field, fairway, court, or at work or church, he would talk to anyone, and serve everyone. People wanted to be with him, work with him, and do business with him. He made each individual feel important. His kindness and care were genuine, and he truly wanted to help everyone. His relationship with his wife Tina was one of a kind. Morgan thought girls were annoying until he met her. They made marriage look easy, because to them it was. They were a team. She took care of him, and he took care of her. Their love and devotion to each other was incredible to see. It changed the people around them. His family meant everything to him. Morgan was a determined man, especially with his children. Through his example, he taught them to be their best and to never give up. He was determined to be the best dad, so he never sat still. He was always doing something with his kids. They played ball, hiked, worked, played games. He even taught them humility by making them call him champion when he won. His joy was his kids. A hallmark of any relationship Morgan built was his humor. He had a calm demeanor, knew how to think things through, and always responded with wit. He was easy going, and most comfortable in shorts and flip-flops. Morgan knew how to have fun. Morgan never let CGD slow him down. He was determined to live each day to the fullest. He was always up for an adventure, whether it was an impromptu road trip, taking the family on a hike, or camping in the backyard. He loved sports, and knew everything about them. He especially loved watching his Chicago Cubs, a passion he shared with his wife and kids. The way Morgan lived each day exemplified his great faith in his Savior, Jesus Christ, and in eternal families. Despite his lot, he exuded love everywhere he went. This is how he testified. It showed within his family, at work, at church, at play, and even in the hospital. The nurses fought over who got to take care of Morgan and Tina. He made the world a better place wherever he was. Instead of letting his condition define him, he let his faith. Morgan leaves behind his wife Kristina, and their 4 children; Colby (11), Kinlee (9), Carter (7), and Teagan (5); his parents, Doris and Lamar; his sister Rachel; his brother Christopher and his father and mother-in-law, David and Yvonne Jorgensen. He is also survived by countless aunts, uncles, cousins, nieces and nephews who love him dearly. Morgan was preceded in death by his two older brothers, Colby and Lucas. Funeral services will be held Saturday, February 6, 2021 at 12:00 p.m. at the Log Lane Chapel located at 115 W. 2000 S. Washington, Utah. A visitation will be held Friday evening, February 5, 2021 from 5-7 p.m. as well as Saturday before services from 10-11:45 a.m. both at the Log Lane Chapel. Interment will be held in the Washington City Cemetery. For those wanting to make donations, a memorial fund has been set up at Cache Valley Bank. Tina would like to thank the doctors and nurses at NIH who fought to get Morgan home to his kids. She is awed and grateful for the outpouring of love from the innumerable people Morgan impacted. https://youtu.be/-NnPWCK9R4Y

Morgan Lee Gubler, 39, passed away with his wife by his side on January 30, 2021 at the National Institute of Health in Bethesda, Maryland after a valiant battle with the effects of CGD. Morgan was born November 9, 1981, the fourth of five children,... View Obituary & Service Information

The family of Morgan Lee Gubler created this Life Tributes page to make it easy to share your memories.

Morgan Lee Gubler, 39, passed away with his wife by his side...

Send flowers to the Gubler family.