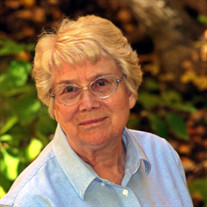 Muriel Sylvia Grayson Newson, 93, was born August 29, 1928, in Salt Lake City, Utah to George Edward Grayson and Geerji Klaassen. She passed away peacefully at home surrounded by her children on February 24, 2022, in La Verkin, Utah. Muriel grew up on the east bench of Salt Lake City, graduating from East High School in 1948. After graduation she attended LDS Business College graduating in the secretarial field. She worked for 7 years at Bennett Ford where she met N Wayne Newson. They were married June 21, 1951 and made their first home in a garage that they had converted into a small home in Bountiful, Utah while their built their bigger house. While in Bountiful they were blessed with four children, Michael, Cheryl, DeAnn, and Barbara. They were sealed as a family in the Salt Lake Temple on August 19, 1966. Once all their children were in school, she worked for Prudential Federal Savings for almost 5 years as a secretary to the Senior Loan Servicing Counselor. After 18 years in their Bountiful home, they moved to Salt Lake City where they lived for a couple years in the house she grew up in. They then purchased a 130-acre dairy farm in Fairview, UT and moved there in 1971. She went to work for Intermountain Health Care at Sanpete Valley Hospital where she was the secretary to the administrator and served with the State of Utah as Registrar for birth and deaths for the Sanpete area. Upon her retirement in 1988 they moved to La Verkin, UT. Her family was her world. She was always so excited when her family would come to visit. She was proceeded in death by her husband of 70 years Wayne Newson, her parents, brothers Rulon, George, and Gerald Grayson, sister Edna Rustad, and grandson Matthew Newson. She is survived by her children: Michael (Virginia) Newson, Cheryl (Jeff) Anderson, DeAnn (Ben) DeMille, and Barbara (Steve) Smith; 19 grandchildren, 35 great-grandchildren, 1 great-great-grandchild, and numerous nieces and nephews. Viewings will take place Thursday, March 3, 2022, from 5-7 pm and Friday, March 4, 2022, from 12-12:45 pm at the La Verkin West LDS building 70 S 300 W. Funeral services will begin at 1:00 pm at the same location. Interment will be Monday, March 7, 2022, 1 pm at Memorial Lakeview Cemetery, 1640 Lakeview Drive, Bountiful, UT.

The family of Muriel Sylvia Newson created this Life Tributes page to make it easy to share your memories.

Send flowers to the Newson family.