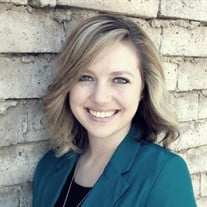 MyKey Ann Jepson Hilton slipped away September 12, 2018 at her home in West Jordan, Utah, surrounded by her family and friends. MyKey was born May 4, 1990 to Mike and Jean Jepson of Hurricane, Utah. Her big brother, Layne, was excited to meet his new baby sister, and their union became a sibling bond unlike any other. Layne and MyKey spent their entire childhood as the best of friends, with Layne always watching out for his little sister. MyKey had a very happy childhood filled with lots of friends and dozens of cousins, whom she loved dearly. She loved swimming, hanging out with her family, going camping and fishing, and making trips to Panguitch, her second home. MyKey graduated from Hurricane High School in 2008. She loved dancing with the Tigerettes drill team and was a great friend to all. She'll always be an H-Town Tiger! Her post-high school achievements included graduating from the Utah College of Massage Therapy in 2009 and serving as a religious missionary for the Church of Jesus Christ of Latter-day Saints from August 2012 - February 2014. She served in the Virginia, Richmond Mission. She fell in love with her sweetheart Michael Hilton, and they married on April 25, 2015 in the St. George L.D.S. temple. On October 27, 2015, MyKey lost her dad and biggest fan, Mike, to brain cancer. She learned from him that "sometimes fighting is the answer." Eight months later, MyKey and Michael welcomed sweet baby James Michael on June 15, 2016. He became the instant ray of light and happiness in their lives. On December 30, 2016, MyKey was diagnosed with stage 4 metastatic breast cancer. She knew that now it was her turn to fight. MyKey fought as brave and graceful a battle as has ever been fought on this earth. Throughout her life, amidst debilitating pain and sickness, and even in her death, she blessed and continues to bless those around her with her humility, kindness, and unwavering conviction. Her example and influence are more far-reaching than she could ever imagine. MyKey is survived by her husband Michael Robert Hilton and son James Michael Hilton of West Jordan, Utah; mother Jean Cooper Jepson of Hurricane, Utah; and brother Layne Nathaniel Jepson of Hurricane, Utah. She is preceded in death by her father, Mike Jepson. Surely there was never a sweeter reunion than when MyKey flew into the arms of her dad! She is also preceded by maternal grandparents James and Ophelia Cooper, and paternal grandparents Layne and Orva Jepson. Funeral Services Viewings will be held Thursday, September 20th from 6-8 p.m. and Friday, September 21st from 9-10:45 a.m. at the Hurricane West LDS Stake Center, 272 S 700 W Hurricane, Utah. Funeral services will be held Friday, September 21st at 11:00 a.m. followed by Interment at the Hurricane City Cemetery. On behalf of MyKey and her family, thank you to all who fought this second round of terminal cancer alongside them. Thank you for your endless service, prayers, and words of love. "...but it occurred to me that this life is about the fight for immortality, not for mortality." ~ MyKey Ann Hilton

MyKey Ann Jepson Hilton slipped away September 12, 2018 at her home in West Jordan, Utah, surrounded by her family and friends. MyKey was born May 4, 1990 to Mike and Jean Jepson of Hurricane, Utah. Her big brother, Layne, was excited to meet... View Obituary & Service Information

The family of MyKey Ann Jepson Hilton created this Life Tributes page to make it easy to share your memories.

Send flowers to the Hilton family.