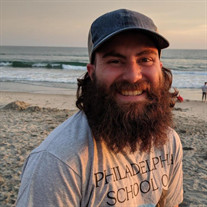 NATHAN DONALD WHITNEY 11-06-1988 - 8-23-2021 Son of Darrell George and Sally (Ruesch) Whitney, came into this world very much wanted and loved by his 3 sisters; Lynette (LaLa) & Chuck Barton, Kimberly, Gail (Andy Luke) and his 4 older brothers: Travis (Juleen), Luke (Denise), Jacob (Amanda) and Rob (Cathy). His BEST FRIENDS through life are his nephews and nieces; Whitney, Tyler & Sammie Barton, Braden & Korben Hallman, Drew, Hunter, Carter (deceased), Abby & Preston Luke, Taya & Ky Whitney, Sean, Trey & Hayes Whitney, Brigham, Leland & Kenny Whitney and Axel, Talan & Harley Whitney. Grandparents Donald George (deceased) & Connie Whitney and Lyman & Audrey Ruesch ( deceased) When Nate was 2 yrs. old, Laura Bergeson of Dayspring Montessori invited his mom to assist in the 2 yr old class. He loved the school and went on to graduate 6th grade where Wesley and Tyson were his closest friends. His friends through his teens were Tanner, Justin, Scott, Jace, Trevor, Trent, Spencer & Mitch. He earned his Eagle Scout Award + 4 palms and graduated PVHS, attended Dixie State +SUU in IT. He was employed at Pine View Middle School and Tonaquint Middle School as an IT Lab teacher. Nate has struggle with OCD, anxiety & depression since he was 8 yrs. old. He loved his counsellor Lynne Clark Brunson who has helped him through the years. He was socially awkward and had few close friends. His whole life centered around his family, nieces and nephews. He was a genius at computers, ANY problem he could solve. Because of his OCD, he had a hard time trusting anything. He asked a girl out when he was 16, she turned him down and he asked another out in college, who turned him down too. He resigned himself to being alone with Mom & Dad the rest of his life. He met “the love of his life” Anne Bringhurst (Gary & Marcie of Gunlock) online, dated and were married June 2018. They lived in Sandy Ut. where he did IT for the city and then moved to Portland Oregon and did Computer Tech. The COVID Pandemic exacerbated his OCD, anxiety & depression, both he and Anne working from a tiny studio apartment just blocks from the federal building unrest. The smoke from the forest fires were so bad, they came home in August for a visit where they separated. He was suffering intensely with anxiety, depression & suicidal thoughts and asked to be hospitalized in November but then attempted a suicide at Christmas. We have exhausted every treatment, counselling, psychotherapy and medication trying to heal until his only “hope” for a better life was to be with Heavenly Father and family in heaven. We will miss you Nate, so kind, loving & spiritual, his hugs were straight from the heart. Our comfort is in the gospel of Jesus Christ, knowing that through His Atonement, we will be a “family forever”. Because of COVID concerns, there will be no funeral. A family memorial will be held at a later time. In lieu of flowers, please share your memories of Nate for his scrapbook at [email protected]

The family of Nathan Donald Whitney created this Life Tributes page to make it easy to share your memories.

Send flowers to the Whitney family.