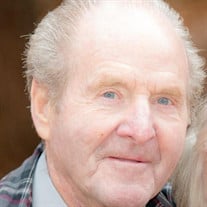 Washington, UT–Neil Hardy, 87, passed away on March 7, 2021 in St. George, UT. Neil was born February 4, 1934 in Las Vegas, NV to Leonard and Pansy Leavitt Hardy where McCarren Airport currently resides. He married Colleen Louise Johns in Salt Lake City, UT on December 15, 1956. Their marriage was later solemnized in the Salt Lake City Temple. Dad led an eventful life. He moved from Las Vegas to LaVerkin in 1938 when he was 4 years old. He worked with his family on their fruit farm planting fruit and nut trees, harvesting the fruit, and peddling their goods to the surrounding communities in Utah and Nevada. While peddling fruit he met Midge, his childhood dog that he loved an adored, and ended up exchanging the rest of his fruit for her that day. After graduating from Hurricane High School in 1952, vowing never to return to LaVerkin, Dad joined the Army. He served in Germany during the years of the Korean War and always spoke highly of the experience, but said that when he sailed into New York Harbor from Germany and saw the Statue of Liberty, he knew he was home. After his discharge papers came in, Dad flew straight to Detroit to pick up his 1956 turquoise and white Ford Fairlane, right off the assembly line. He then made his way home to LaVerkin only stopping to pick up his childhood friend, Norman Gubler. Dad had many adventures in his life including riding railway cars with Norman Gubler, driving to Alaska with Bob Mace, and working on the Alaska railroad. He also helped build the Los Angeles Temple while living with his missionary brother, Ronald (that is, until the mission president found out). Though he always kept his gypsy spirit, he eventually settled down long enough to ask Colleen to marry him. Dad and Mom lived their young life in Salt Lake City. He went to vocational school to be a mechanic, worked at Kennecott Copper Mine, and carried mail for the US Postal Service. They had their first 5 children in Salt Lake City: Brian, Diane, Brent, Bruce, & Bryce. One day Dad came home, tired of carrying mail in the snow, and said to mom “Let’s move.” And so they did—moving back to LaVerkin in 1969. They added to their family with Denise and Danelle and raised their children on 5 acres, which included a fruit orchard, pecan trees, farm animals, and, of course, a swimming pool. Dad began his entrepreneurial ventures with building a garage in LaVerkin where he worked as a mechanic and sold gas. He also built the KOA Campground in LaVerkin at the base of the hill to Zion National Park. Building the KOA is where Dad first learned how to install fiberglass pools, a skill that would serve him well in the years to come. His next and longest lasting venture took him into the fiberglass pool installation industry where he continued to work until the last week of his life. Dad had a great love for animals. Many doggies were in our family. His little side kick in his later years was his poodle, Suzy, who went everywhere with him. Pool clients would often comment that they missed Dad & Suzy coming to their home to check on their pool installation. And of course, Dad loved to travel. Whether riding the railroads with Norman, traveling around Europe on leave during his Army years, or taking his family on their many fun vacations, Dad was often on the move and loved to see new places. However, he never lost his love for southern Utah and always returned home. We had the opportunity to work with our dad in every business he started. He instilled the value of hard work, honesty, and integrity to all those he met, whether personally or professionally. One of Dad's most special traits that we will always cherish was his deep love for Mom. He showed his love in the way he talked to her, how he cared for her, and by setting the example to his children of how to treat their mother. He always had tender emotions when talking about those he loved and admired. The beautiful family that Dad and Mom created will live on forever. Dad exemplified a life of service and caring for those less fortunate which matched up perfectly with his favorite song from Primary, “Give, Said the Little Stream” He was always one to give a ride to the hitchhiker, offer a meal to those who needed it, and help anyone without any thought of praise, return, or reward. It was not an occasional act but rather a consistent way of life. It was simply who he was at his core. Neil is a member of the Church of Jesus Christ of Latter-Day Saints. His temple covenants were special to him and he honored them. He loved to read and write in his journals. We now have those precious journals to pass on to his posterity. Neil is survived by his wife Colleen; children, Brian, Diane Empey (Ashley), Brent (Geri), Bruce (Stacy), Bryce (Sandra) and Denise Crosier (John). He has 22 grandchildren and 10 great-grandchildren with 4 great granddaughters on the way this year. He is also survived by his brother, Ronald Hardy. Neil was preceded in death by his infant daughter Danelle, parents Leonard & Pansy Hardy, siblings Daisy and Tom Cooper, Leslie Hardy, Paul and Rae Hardy, and Carol and Don White. Funeral services will be held on Saturday, March 13, 2021 at 12:00 p.m. at his LDS Chapel, 628 S. 3000 E. St. George, UT. A viewing will be held prior the service from 9:30 to 11:45 a.m. at the church. Interment will be held at the LaVerkin City Cemetery. Military honors will be provided by the Hurricane American Legion. For family and friends that are unable to attend or have concerns about covid, services will be live streamed via Zoom at. https://us02web.zoom.us/j/89376047281?pwd=YnNsSVE3WCtWMHY3ZEIxWml4ejF0dz09 Meeting ID: 893 7604 7281 Passcode: neilhardy Family and friends are invited to share tributes online at www.SerenityStG.com. Arrangements are under the direction of Serenity Funeral Home of Southern Utah, 986-9100.

The family of Neil Hardy created this Life Tributes page to make it easy to share your memories.

Send flowers to the Hardy family.