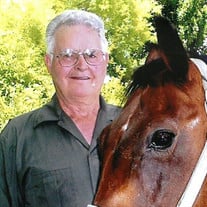 Nephi Jay Anderson was born January 14, 1926 in the kitchen of their home in Oak City, Utah. He was the first of five children born to Don Lyman and Thelma Lovell Anderson. They were the first home in Oak City to get electricity since a baby was being born. As a young boy in the small community of Oak City, he was always involved in work, fun, and adventure with his brother Don. He attended his first eight years of school in the Oak City grade school. He completed his schooling in Delta, graduating from high school in 1944. Shortly thereafter, he was drafted to serving in WWII where he served on the island of Saipan as a radio operator. At the end of the war, he returned home to continue farming. In the spring of 1948 he attended the Branch Agriculture College (SUU). He was called to serve an LDS mission in November of 1948. He served in the Western States Mission from 1948-1951, where he met his future bride in Wyoming. He loved serving as a missionary, which continued throughout the remainder of his life. In 1955, he and Faye moved from their ranch in Carey, ID to View (Burley), Idaho to continue raising their family while developing their dairy operation. Nephi’s committed devotion to family and the gospel were unparalleled. He was a lifelong and dedicated member of the Church of Jesus Christ of Latter-day Saints. He was stalwart and committed and taught his family by example with a love for music, the outdoors, and a devotion to God. His service included missionary work, teaching, and temple work. After Faye passed away in 1990, he married Lila Priest. Together they served a mission in Pennsylvania, and spent many years working in the St. George, Utah Temple. Lila passed away in 2009, and he married Kareen Hatch Crockett. For several years they have lived their summers in Chesterfield, Idaho and their winters working in the temple in St. George, Utah Nephi was a social magnet. He never met anyone who didn’t quickly become a friend. He had a great personality and a quick sense of humor. He never heard a story that he couldn’t retell a little bit better. He had a strong work ethic, but he always took time to visit with or help a friend in need. Nephi dedicated his life to his family. He and Faye raised their eight children in View (south of Burley), Idaho on a dairy farm. Sharol Ruggierro (Lew), Phoenix. AZ; Jay (Susan), Burley, ID; Douglas (Melba), American Fork, UT; David (Susan), St. George, UT; Annette Laraway (Mark), West Jordan, UT; Evan (Noreen), Camano Island, WA; Rachelle Arbon (Jeff), Blackfoot, ID; Janalee Dimond (Lindsey), Buhl, ID. He is also survived by, Susan Priest Beck, (David), Mike Priest, Scott Priest (Wendy), Ryan Crockett, Kyle Crockett, Brett Crockett, Teresa Crockett Dombroski, Von Crockett, and Callie Crocket Davids. Nephi is preceded in death by his wives: Faye and Lila and three granddaughters: Ashley Anderson, Nikelle Anderson, and Jennifer Laraway. Nephi is survived by his loving wife, Kareen, 31 grandchildren and 44 great- grandchildren with several more on the way. He also has nearly 200 grandchildren and great-grandchildren though his marriages to Lila and Kareen. To his family, friends, and neighbors, Nephi will be remembered for these things: • Hard work- always working to squeeze a bit more work into a day • Outdoors- loved camping and having weinee roasts • Horses- never met a horse he didn’t like • Music- promoted and loved to listen to good music and inspired all to do the same • Devotion to following the Spirit and incessant communication through prayer • An ever-increasing appreciation and love for family and close friends Nephi passed away peacefully on the morning of September 22 at Quinn Meadows Care Center in Pocatello, Idaho. There will be a viewing at the View 1st Ward located at 550 S. 500 E., Thursday, Oct. 3 form 6-8pm and before the funeral services on Oct. 4 from 10:00-10:45 am. Funeral services will be held at the View 1st Ward Church at 11:00 am. Interment will be at the View Cemetery.

Nephi Jay Anderson was born January 14, 1926 in the kitchen of their home in Oak City, Utah. He was the first of five children born to Don Lyman and Thelma Lovell Anderson. They were the first home in Oak City to get electricity since... View Obituary & Service Information

The family of Nephi Jay Anderson created this Life Tributes page to make it easy to share your memories.

Send flowers to the Anderson family.