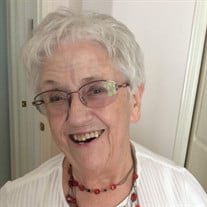 Nola Dorothea Matthews Collier was born in Cape Town on March 21, 1937 and was raised in Johannesburg. She participated in many stage productions from a young age, including “Robinson Crusoe,” which toured South Africa. At 21, upon advice from a prophet David O. McKay of the LDS Church, she left to attend BYU in Provo, majoring in music education. She was the first to have a university education in her family. Upon graduating, Nola took a job in Rowland Heights, California, teaching junior high. She also joined the Southern California Mormon Choir and had solo vocal performances around Southern California. Nola met and married Grant Collier in 1965 in Alberta, having established a playful and fierce love and friendship that lasted 57 years. They raised six children, two of whom died untimely deaths. Nola was respected in her communities for being a gentle sculptor of souls, who could coax deep feeling and beautiful sound from the most tone deaf among us. She cared deeply about the whole person of each of her students, convinced that a person’s voice derives from the depths of human experience and aspiration. She returned to school at age 50 and took a master’s degree in choral conducting, cementing another talent and beginning her university teaching career. She was charismatic and sensitive, cultivating beauty and laughter; if she called you an “ugly thing,” it meant she loved you. Nola wanted everyone to know of her and her husband’s deep and abiding faith in the Savior and the Atonement, feeling a “deep reverence and gratitude,” as she often wrote. She looked forward to being reunited with her two children after passing the veil of death, and she was indeed ushered there by her loving husband who was there holding her hand. She is survived by her husband Grant, children Greg (Samantha), John (Claudia), Delinda (Jen), and Heather (Ryan); nine grandchildren; and one great grandchild. Funeral service will be held on Saturday, May 7, 2022, at 12:00 p.m. at the Indian Hills Chapel, 1282 West 500 South Circle, St. George, Utah. A viewing will be held prior to service at 10:30 a.m.–11:45 a.m. at the same location. Interment will take place in the Tonaquint Cemetery

Nola Dorothea Matthews Collier was born in Cape Town on March 21, 1937 and was raised in Johannesburg. She participated in many stage productions from a young age, including &#8220;Robinson Crusoe,&#8221; which toured South Africa. At 21, upon... View Obituary & Service Information

The family of Nola Dorothea Matthews Collier created this Life Tributes page to make it easy to share your memories.