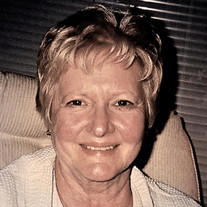 PATRICIA ANN WILKINSON Pat was born in Osborne, Kansas on June 11, 1932 to her parents Willie Marvinec and Beryl Miller. Her roots were deep in Kansas, she loved the sunflowers and the blue sky. She spent a lot of time with her grandparents and uncles in Nebraska and often spoke of the farm and her horse which she loved. She loved her uncles very deeply and felt them as older brothers since she was an only child. Her deep love of family was obvious through her tenacity of genealogy. She had compiled all typed family records and set up her office in the garage and was found there in her spare time. Pat lived in several places and would share stories of her times when she was very young taking buses around Denver and Los Angeles exploring. She enjoyed traveling and seeing new places. Pat fell in love with an upper classman who later became her husband, Don Wilkinson. They were married on February 11, 1951 in Tijuana, Baja, Mexico. Don was in the Marine Corp and the Corp did not acknowledge marriages from Mexico, so they were remarried the next day in the States. They were sealed for time and all eternity in the St. George, Utah Temple on September 28, 2005. Together they had 4 children, Don, Patrick, Cynthia, and Stephanie, 8 grandchildren and 12 great-grandchildren. The family will miss her sense of humor, smile, beauty and generosity. Pat had a great love of cooking, needle point, sports, and traveling. All of which she did a lot of. Pat loved history and was an avid reader. She was baptized in Huntington Beach, California into the Church of Jesus Christ Latter-Day Saints. She was an active member and held many positions in the church. Pat was at most all her children’s sport games and was their biggest cheerleader. Pat was a Parent Teacher Association President and active in her kids’ schools. She loved to bowl and was on a team for many decades. Pat donated to animal shelters and rescued many dogs and cats in her lifetime. Pat had several life-long friends and is in great company now. She was preceded in death by her husband of 68 years and now is joined in the eternities with him. A graveside service for Patricia will be held on Wednesday, July 24, at 10 a.m. at New Harmony Cemetery in New Harmony, Utah.

PATRICIA ANN WILKINSON Pat was born in Osborne, Kansas on June 11, 1932 to her parents Willie Marvinec and Beryl Miller. Her roots were deep in Kansas, she loved the sunflowers and the blue sky. She spent a lot of time with her grandparents... View Obituary & Service Information

The family of Patricia Ann Wilkinson created this Life Tributes page to make it easy to share your memories.

Pat was born in Osborne, Kansas on June...

Send flowers to the Wilkinson family.