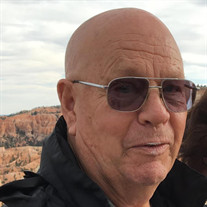 Paul C. Slade, age 77, died February 3, 2021, in St. George, Utah from Covid-19. On June 16, 1943, Clyde L. and Erma Slade were blessed with their first baby boy. Paul Clyde Slade was born and raised in Ogden, UT, where he loved growing up surrounded by extended family. It gave him the opportunity to see his grandmother every morning before school. She was a feisty character and Paul loved her spunk. He spoke often of spending time with cousins in the orchards, helping his grandparents with horses for the Mounted Posse, and learning a strong work ethic from his parents. After graduation, Paul joined the Army where he spent a large portion of time in Turkey before returning to the United States and was stationed in California. While still in the army he married Barbara Louise Brooks with whom he had two children, Lisa and Michael. After his honorable discharge, he worked hard on and was proud of the associate degree he earned from Santa Rosa Junior College. He always wanted to further his education but his family came first and he was not able to do so. He earned his pilot’s license and loved to fly. He held numerous other jobs, but nothing held a candle to his proudest profession... Paul joined the police force in 1966, where he thrived, quickly moving up the ranks. His favorite partner in the police force was his dog Bogie, with whom Paul attended many working K-9 events. Through these events Paul met the woman who would become his second wife, Lynne Marie Ball. The attraction was instant, but circumstances prevented them from marrying until 1976. At that time, it was with tremendous joy that they combined their two families, eventually being sealed for all eternity in the Oakland Temple. Paul and Lynne always stayed busy, centering their life on family. So, it was because of family that they made the decision to buy a farm and move to Clifton, ID, in 1981. Looking back, Paul saw this choice as the greatest mistake and the greatest blessing of his life. Over the next 25 years, they raised everything from cows to crops, pigs to horses, and some difficult children. Paul was active in Farmers of America, advocating for farmer’s rights, the 4-H program, including the Horse 4-H, and announcing horse events for his girls. A bit later in life, he began a career in real estate and looked forward to retirement. His life quickly changed when Lynne unexpectedly passed away in 2006. A year later, Paul was lucky enough to meet his third wife, Jacquie Stratton. With her, he fulfilled many of his bucket list items, such as a transatlantic crossing on the Queen Mary, traveling to Scotland, Japan, Jordan, Dubai, and Mexico, and 4-wheeling directly from his dream house to the desert backcountry. He adopted her six children into his heart, sharing his wisdom and wit with them. He was not always proud of his children, but he always loved them. The example of grace, forgiveness, charity, hard work, humor, and love will be missed by all. We know he is hoping we actually learned it. Paul was a father to Lisa, Michael, Stephanie, Stephen, Shawn, Jennifer, and Amy. He was also fortunate enough to become a father figure to his stepchildren: Rebecca, Heather, Matthew, Georgeana, Rodrick, and Maera. Paul is preceded in death by his wife Lynne and his parents Clyde and Erma. He is survived by his wife Jacquie, seven children, six stepchildren, 38 grandchildren, 11 great-grandchildren, and his sister Annette and brother David. Funeral services will be held Wednesday, February 10, 2021, at 1:00 p.m. at the Church of Jesus Christ of Latter-day Saints Chapel at 452 North 2600 West, Hurricane, Utah. A viewing will be held prior to the funeral from 12-12:45 p.m. There will be a socially distanced outdoor luncheon following the funeral service at Paul’s dream home at 236 N 3930 West in Hurricane. Interment, with military honors will take place Thursday, February 11, 2021, at 2:00pm at the Ogden City Cemetery, 700 E. 20th Street, Ogden, Utah. The funeral will be broadcast live via YouTube at https://www.youtube.com/channel/UCL_nQfWRQisnQUZTfejidww In lieu of flowers you may wish to donate to your favorite charity. Two of Paul’s are Wounded Warriors and Shriner’s Hospital. Family and friends are invited to share tributes online at www.SerenityStG.com. Arrangements are under the direction of Serenity Funeral Home of Southern Utah, 435-986-9100.

The family of Paul Clyde Slade created this Life Tributes page to make it easy to share your memories.

Send flowers to the Slade family.