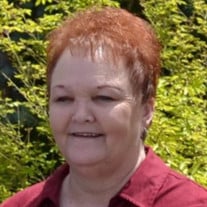 Peggy Ann Robinson passed away at her home October 19th 2020 after a battle with bladder cancer. Peggy was born September 21, 1952 to Wilma and Clark Lamoreaux in Cedar City Utah and grew up in Paragonah, Utah with five brothers and one sister. After graduating from high school, she attended cosmetology college in Cedar City, Utah. Although allergies and motherhood ended her work as a hair dresser after only a couple years, her skills were used to keep her husband and children looking their best. Peggy met Rick Robinson after high school, on a blind date in late fall of 1970. She was angry with her friend Michael for lining her up on a blind date, and told Michael to never do that again. But after that first date there was no need since her and Rick knew right off that they were meant for each other. They were married for time and eternity in the St George Temple on September 4th 1971 and have enjoyed 49 years together. Peggy lived in Cedar City with her husband and family all of her married life except when Rick’s work took them briefly to Rock Springs, Wyoming, Salt Lake City, Utah and Henderson Nevada. After her children were old enough to be in school, she found a job that allowed her to be home for the kids when they were out of school, working at North Elementary School where the youngest ones attended. She taught P.E. for a few years until taking a position in a children’s day care facility where she could continue her passion for helping children be the best they could be. She moved from day care to Canyon View High School where she was made the secretary of the special education department and spent the next 14-15 years in that position until retirement. She loved her opportunity to work with the students who came from less than ideal environments and was instrumental in helping several to find it in themselves to stay in school and graduate. Peggy served in many positions of leadership in the Church of Jesus Christ of Latter-Day Saints including Primary President and councilor multiple times as well as in Relief Society presidencies and Young Women’s President and even camp director, but her favorite position in the church was primary chorister. After retirement, Peggy found great pleasure in going RVing with Rick. She loved spending evenings in the trailer and days with the mountain air blowing through her hair while traveling the trails in the side-by-side. Peggy was preceded in death by her parents, Clark and Wilma Lamoreaux, brothers Kenny, Mike, and Jim Lamoreaux, and father-in-law Mark Robinson. Peggy is survived by husband Rick, siblings LaRae (Jerry) Mortenson, Brad, David, mother-in-law LaFawn, sister-in-law Tammy (Ted) Bird, brothers-in-law Randy (Deborah) and Greg (Tamera), children Brandant (Naomi), Staci (Jesse) Jenson, Shane (Liahona), Kyle (Rachael), and Troy (Mandy), 23 grandchildren, and 1 great grandchild. The family would like to thank all the medical professionals in the IHC hospitals, home care and personal doctors who took such great care of Peggy in her last days of mortality. Funeral Services will he held at the 4th Ward Building of the Church of Jesus Christ of Latter-Day Saints at 500 W. 400 N. in Cedar City on Friday, October 23 at 11:00 am with a viewing before at 10:00 am. A formal viewing will be held Thursday, October 22 from 6:00 – 8:00 pm. Interment will be in the Paragonah, Utah Cemetery at 1:00 pm following the Funeral Services.

Peggy Ann Robinson passed away at her home October 19th 2020 after a battle with bladder cancer. Peggy was born September 21, 1952 to Wilma and Clark Lamoreaux in Cedar City Utah and grew up in Paragonah, Utah with five brothers and one sister. After... View Obituary & Service Information

The family of Peggy Ann Robinson created this Life Tributes page to make it easy to share your memories.

Send flowers to the Robinson family.