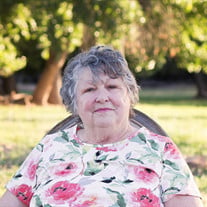 Penelope (Penny) Kocinski Watkins, St George Utah age 72, Born May 26 1947 to the parents of Eugene John and Mary Kate Scoggins Kocinski in SLC Utah. Died January 26 2020 at her home surrounded by loved ones after a courageous battle with cancer.... View Obituary & Service Information

The family of Penelope Kocinski Watkins created this Life Tributes page to make it easy to share your memories.

Send flowers to the Watkins family.