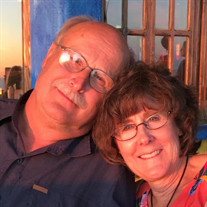 Randy Max Cragun passed away on July 3, 2021 in St. George, Utah. Randy was born in Ogden, Utah to Cecil LaVern and Gladys Virginia Aikens Cragun on March 5, 1953. Randy grew up in Pleasant View, Utah and graduated from Weber High School in 1971. He met the love of his life, Betsy Ollett, at the counter of the Red Baron Restaurant in Brigham City, where he worked as Head Cook. It was love at first sight, and they were married on August 14, 1972. They then purchased the restaurant and ran it for 25 years. Their son Ryan was born on March 24, 1973 and daughter Anne came six years later on May 1, 1979. After raising their family in Brigham City, they sold the restaurant and moved to St. George in 1999. Randy was a route driver for Sara Lee Corporation and both he and Betsy retired in 2017. Randy loved gardening, woodworking, camping, and spending time with his two grandchildren Jonah and Ashlyn. Randy was preceded in death by his parents and brother, Cecil Cragun. Randy is survived by his wife Betsy, son Ryan Cragun, daughter Anne (Terry) Long, grandson Jonah Long, granddaughter Ashlyn Long, and siblings Pat (Gerald) Zabel, Carol Parker, Larry (Jeannie) Cragun, Robert Michael “Mick” (Donna) Cragun, JaNae (David) Jackson, and sister-in-law Carol Anne Cragun. In lieu of flowers, please consider making a donation in Randy’s honor to the Serenity Pay if Forward Account. It is designed to help families in need particularly for those in our community who have lost a child. A small family memorial will be held at a later date.

The family of Randy Max Cragun created this Life Tributes page to make it easy to share your memories.

Send flowers to the Cragun family.