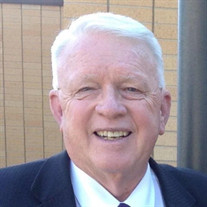 Raymond Jack Eves, 76, of La Verkin, Utah passed away peacefully on March 20, 2022 in Hurricane, Utah surrounded by his loving wife Jill and his family. Ray was born on May 13, 1945 in Cedar City, Utah to Jack R and Fawn Gubler Eves. He attended school in Hurricane, Utah. When he was 15 years old, his family moved to Sunset, Utah where he attended and graduated from Clearfield High School. After graduation he served a mission for The Church of Jesus Christ of Latter-day Saints in Florida. Raymond was the first missionary in the family to serve a mission since his grandfather Joseph Edward Gubler, Jr. had served in the Southern States Mission. He was so excited to serve in Florida to follow in the footsteps of his beloved grandfather. Upon returning from his mission, he met and later married his darling sweetheart Jill Draper on March 3, 1967 in the Salt Lake Temple. He furthered his education at Weber State College where he earned an Associate of Science degree. After he graduated from Weber, he enlisted in the Army Reserve and served for 6 years with the 6th Battalion Field Artillery. Ray spent many years in construction, real estate and land development. He had a talent for building beautiful homes. He loved working with heavy equipment. Many of his grandsons enjoy wonderful memories of their grandpa taking them with him on his backhoe. Ray served as the Mayor of La Verkin from 1994-1997. Raymond was a devoted member of The Church of Jesus Christ of Latter-day Saints. He always said that Jesus Christ was his best friend. He faithfully fulfilled his church duties and served in various callings including Bishop, High Councilman, Stake Mission President, Primary Teacher and Scoutmaster (one of his favorite callings). He had a great passion for serving others and he taught his children by example. He and his wife Jill served two years in the Samoa Apia Mission. He loved the Samoan people and felt he had a Polynesian heart. They later served in the Utah St George Mission. Ray was preceded in death by his parents, Jack R and Fawn Gubler Eves, his son Jacob Michael Eves, and his grandson Alalate Raymond Ulu’ave. He is survived by his wife Jill Draper Eves, his 9 children, Sheila (Steve) Taysom, Raquel (Richard) Groom, Jack (Gina) Eves, Becky (Ryan) Church, Derral (Carolyn) Eves, Joseph (Holli) Eves, David (Shannon) Eves, Stephen (Breann) Eves, and Michael (Camie) Eves. He is loved and cherished by his 39 grandchildren, and 8 great-grandchildren. He is also survived by his siblings, Eyvonne Fawcett-Jenkins, Sharlene Stoker, Beverly McCormick, Jeanenne Porter, Jerry Eves, and Royce Eves. Funeral services will be held Friday, March 25, 2022 at 11:00 am at the La Verkin LDS Stake Center, 481 N Main St. There will be a viewing from 9:00 – 10:30 am prior to services at the church. Interment will be in the La Verkin City Cemetery. We express heartfelt appreciation to his daughter, Sheila Taysom, NP for her personal loving medical care, Intermountain Home Health and Hospice, Serenity Funeral Home and The Haven at Sky Mountain. Live funeral stream here http://www.youtube.com/TheEvesFamily/live

Raymond Jack Eves, 76, of La Verkin, Utah passed away peacefully on March 20, 2022 in Hurricane, Utah surrounded by his loving wife Jill and his family. Ray was born on May 13, 1945 in Cedar City, Utah to Jack R and Fawn Gubler Eves. He attended... View Obituary & Service Information

The family of Raymond Jack Eves created this Life Tributes page to make it easy to share your memories.

Send flowers to the Eves family.