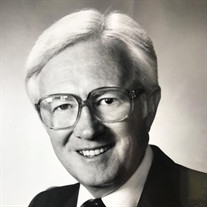 Richard (Dick) James Bradford passed away peacefully in St. George, UT on January 8, 2021. He lived an exceptional life of community service, church service and love of family. Dick was born April 5, 1932 in Salt Lake City, UT to Florence (McLaws) and James Henry Bradford. He was a faithful member of the Church of Jesus Christ of Latter-day Saints. He married his high school sweetheart Suzanne (Lindberg) on June 23, 1954. Their marriage was later solemnized in the Salt Lake Temple. Dick served his country in the United States Army (1953-1955) during the Korean war while stationed in in Monterey, CA. After being honorably discharged, he completed his undergraduate degree and Master of Business Administration at the University of Utah, graduating with the University’s first MBA class in 1957. Dick managed and owned a variety of small businesses throughout the West before entering public service. He loved being outdoors and enjoyed hiking, camping and hunting. He served for many years as a Boy Scout leader. His public service career began with successfully advocating for the use of open space for city parks and recreational facilities and he was instrumental in the establishment of the Alta Canyon Sports complex in Sandy. Dick later was appointed as Director of Economic Development for both Sandy City and the State of Utah where he served under four Governors. He led the State’s efforts to promote Utah as part of the 2002 Winter Olympics. Dick was elected to the Utah State House of Representatives and served for 10 years where he focused on improving public education in the State. Dick and Suzanne were married for 66 years living in Salt Lake City and Sandy. During their many years together, they enjoyed traveling the world, tennis, bicycling, and spending time with family and friends. Visitors marveled at their reliable garden bursting with ripe tomatoes and well-tended fruit trees, while enjoying a meal with their magnificent backyard view of the mountains. In retirement, Dick and Suzanne moved to St. George where he welcomed visitors, valued time with family, and explored the Southwest. He and Suzanne served as senior missionaries in the LDS Washington, D.C. North Mission, as service missionaries at Deseret Industries, and as hosts at the Joseph Smith Memorial Building. Dick is remembered for his energy, hard work, community and church service, passion for the outdoors and love of family. Dick is survived by his wife Suzanne; sons, Kent (Yackan) and Steven (Robin); daughter, Diane; grandchildren, Sarah (Douglas) Wawrzynski, Keith (Heather) Bradford, Andrea (Scott) Rackham, Christina Bradford, Hunter Marlon; and great-grandchildren Luke, Stanley, Carsen, Hailey, Isabelle, Daniel, Jackson, and Leah. Dick was preceded in death by his parents, sister LaReine Mortenson and daughter Kristina Bradford. Memorial services will be held virtually on Wednesday, January 13, 2021 at 2:00 pm. Contact Serenity Funeral Services for further information. In lieu of flowers, please make donations to the LDS humanitarian fund.

The family of Richard James Bradford created this Life Tributes page to make it easy to share your memories.

Send flowers to the Bradford family.