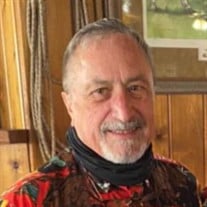 Richard “Dick” Higgins, 80, entered into eternal rest on January 14th, 2021 after a battle with COVID, which resulted in heart failure. We rejoice in his journey from this life to the next. Dick was born on May 4, 1940 in Hamden, Ohio to Ray and Mary Frances Higgins, the oldest of two boys. Dick grew up with his family in Asheville, NC. Dick had a 45-year aerospace industry career. He was involved in a number of programs all of which are too numerous to mention but did include the ejection seat development for the Army, Navy and NASA. His career enabled him to travel extensively to almost all of the free world. Dick received the Life Time Achievement Award for contributions to flight safety in 2006. After managing the Hurricane Mesa Test Facility for many years, in April of 2007 Dick retired to be able to make more memories with his wife Nancy. On October 22, 1999 Dick married the love of his life, Nancy. They started their life in St. George, UT shortly after. Dick would start his day by telling Nancy how much he loved her and would never end a day without expressing his love before he would go to sleep. Dick and Nancy together raised Dick’s two granddaughters Cassandra and Alyssa as their own. They were involved in the Elks Club, and would go on to make so many good friends and wonderful memories. Dick’s love for outdoors helped him to bond with so many true friends who he would consider as family. Dick was a member, Elder and Lay Pastor of the Good Shepard Presbyterian Church in St. George, UT. Dick loved the involvement he had within the church, and another great joy was his involvement in the Salvation Army where he served for 20 years. Dick also volunteered at Dixie Regional Hospital, It truly gave him so much joy giving to others. Dick was an avid outdoorsman and was skilled in fly fishing, fly tying, and also taught fly tying and fly-fishing. He loved and was at peace when he was fishing and enjoying the outdoors with his friends. Dick also enjoyed hunting with bow, rifles, shotgun and muzzleloaders. He loved trying new things and also made knives and arrowheads and anything that would be new and a challenge. In addition to his wife Nancy and brother Don (Jean) Higgins, he is also survived by his daughters: Donna Higgins, Jessica (Rodney) Hogue, Erin (Clint) Orgill, Alison (Eric) Van Brunt, Cassandra Coates and Alyssa Coates; one niece Wendi; three granddaughters Amy, Paige and Alexis; three grandsons Jason, Zachary and Jayden; four great-grandchildren Skye, Hayden, Seraphina and Dasia. He is preceded in death by his father Ray Clyde Higgins and mother Mary Frances Higgins. A memorial will be held in the spring. In lieu of flowers, donations can be made to the Saint George Salvation Army in Dick’s memory.

The family of Richard "Dick" Higgins created this Life Tributes page to make it easy to share your memories.

Send flowers to the Higgins family.