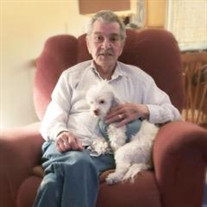 Richard Jack Harris of St. George, Utah passed from the physical world to the spiritual on June 14, 2020 at the age of 76. He was a writer of stories… and this is his. Richard was born September 11, 1943 to Gladys Mae Pourner in Aransas Pass, Texas. 4 months later, his mother married Henry Harris, who became instantly smitten with young Richard’s adorable personality. From that day on, Henry became “Dad” and Richard assumed his surname. In 1953 at the age of 10, Richard moved to Southern California with his family, where he grew up spending most of his free time with his nose in a book. At a young age he acquired his hard work ethic by following seasonal crop farming jobs with his sister, Jackie, migrating through California, Oregon, Utah, and Idaho to help with the family finances. For leisure, Richard played in the fields with Jackie, throwing dirt clods and teaching his little sister how to make a fist and throw a punch. Richard graduated from Perris High School with ease due to his natural zest for knowledge. He then spent a short time in Hollywood pursuing an acting career. With his “bad boy rebel good looks” he even starred as Sal Mineo’s double. However, his heart was lured back home to a tall, blonde, blue-eyed Linda Louise Parker. On March 6, 1965 Richard whisked her away to Mexico, where they eloped. He was completely devoted to Linda his entire life. From a young age, Richard was fascinated with astronomy and science fiction, compelling him to take a few college courses. This inspired his lifelong passion to write short stories and novels. Richard settled down in Romoland, CA, where he raised his 3 rambunctious daughters, causing his gorgeous black curly hair to turn gray. He was a very loving father, making sure they never went to bed without a big bear hug. He began working at GTE as an entry-level lineman, climbing the ranks to eventually retire 26 years later as a switching services supervisor. Co-workers, friends, and family could always hear him whistling or singing a favorite tune as he strolled by. When Richard (or as his friends called him, “Rich”) was not at home taking care of his family, he could be found at the local bowling alley where he played in several leagues and tournaments or sitting quietly on the edge of a lake, fishing pole in hand. After retiring, Richard and Linda traveled in their motorhome for a few years before moving to Round Mountain, CA to be closer to Richard’s mother and sisters. After living there for 18 years, they moved to St. George, Utah where he enjoyed living a quiet life caring for his loving wife and faithful dog. Richard is survived by his wife of 55 years, Linda Harris; his 3 daughters, Cari Keith, April Bools, and Lori Reeve; 9 grandchildren, 5 great grandchildren, and his 5 sisters, Jackie, Joan, Cynthia, Donna, and Freida. He was preceded in death by his father, Henry Noel Harris (1968); his mother, Gladys Mae Harris (2005); and infant brother, Jerry Emmett Harris (1949). The family would like to thank the ICU hospital staff, nurses, and doctors at Dixie Regional Medical Center for trying to keep him with us. No services are planned at this time. Richard’s ashes will be spread in the ocean, as per his request.

Richard Jack Harris of St. George, Utah passed from the physical world to the spiritual on June 14, 2020 at the age of 76. He was a writer of stories&#8230; and this is his. Richard was born September 11, 1943 to Gladys Mae Pourner in Aransas... View Obituary & Service Information

The family of Richard Jack Harris created this Life Tributes page to make it easy to share your memories.

Send flowers to the Harris family.