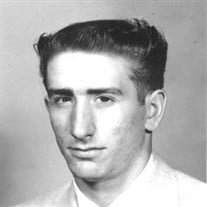 Richard Kenneth Jones, 83, passed away in Ivins, Utah on August 21, 2021. He was born in Cedar City, Utah on August 25, 1937, to Delmar and Kate Jones. He was the oldest of four children. Ken grew up in Enterprise Utah, where he attended school and graduated from Enterprise High School. After high school he attended Dixie College for a year where he took courses in mechanics. Ken was a member of The Church of Jesus Christ of Latter-Day Saints. Ken served the United States of America in the army. He served in Korea where he was a 1st class gunner (81mm Mortar) and a sharpshooter (rifle). Ken was also part of the Honor Guard. Ken married Sharon Twitchell. From their marriage they had their daughter Sally. They lived in the Las Vegas area where Ken worked for Blue Diamond Dry Wall making sheet rock. They later divorced. Ken Later married Kathy Whitmore. They had two children, a son Richard and daughter Angela. At this time, he worked for Pacific Supply where he was in management. Ken and Kathy later divorced, and Ken returned to Las Vegas to work. In later life Ken retired to Enterprise where he spent as much time as he could with his family there. He enjoyed rekindling relationships from his early life and reuniting with his siblings and their families. Ken is survived by his children Sally Marie (Steven) Rivers, Richard Kenneth (Jennifer) Jones and Angela Kate Jones; 9 grandchildren, 14 great-grandchildren, and 1 great-great grandchild. He is also survived by siblings, Douglas (Lorraine) Jones, Joyce (David) Cowley, and Clark (Janet) Jones. He was preceded in death by his parents Delmar and Kate Jones and his grandson Terrill Richard Jones. The family would like to express heartfelt gratitude to the Red Cliffs Care Center in St. George, the V.A. Care Center in Ivins, and Rocky Mountain Hospice for their excellent care of their father, grandfather, and brother during his last months in this life, and for their loving compassion and care for his family. There will be a viewing and visitation on Friday, September 10, 2021, from 2-3 p.m. at Serenity Funeral Home located at 1316 S. 400 E. St. George, Utah. Graveside services will be held September 11, 2021, at the Enterprise City Cemetery at 1 p.m. Military honors will be provided by the American Legion Post 80.

Richard Kenneth Jones, 83, passed away in Ivins, Utah on August 21, 2021. He was born in Cedar City, Utah on August 25, 1937, to Delmar and Kate Jones. He was the oldest of four children. Ken grew up in Enterprise Utah, where he attended school... View Obituary & Service Information

The family of Richard Kenneth Jones created this Life Tributes page to make it easy to share your memories.

Richard Kenneth Jones, 83, passed away in Ivins, Utah on August...

Send flowers to the Jones family.