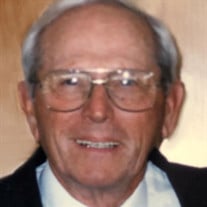 St. George Utah - Richard W. “Dick” Morgan, age 91, passed away in the company of his loving family, on June 8, 2019. Dick was born on February 19, 1928, to Dorothy Day (Weedon) Morgan and Harold David Morgan in Dayton, Ohio. Dick fell in love with his eternal companion, Katharine “Katie”, in junior high, and they were married after high school in 1948. They later joined the Church of Jesus Christ of Latter-day Saints and were sealed for all time and eternity in the Los Angeles Temple. Dick played professional baseball for 6 years in the St. Louis Cardinal organization. He also was an avid golfer who regularly played (and played well) to the end of his life. His life interests included playing the organ, gardening, writing poetry, and baking. Dick successfully managed his own landscaping company and served as bishop in the Covina and Jurupa Wards in Southern California. He lived his life with faith in Jesus Christ and undaunted courage in the face of significant adversity. His wife, Katie, predeceased Dick in 2017. He is survived by his children, Priscilla Cook, Dorothy Orme (Michael), Robin Long, Richard S. Morgan (Janet), Andrew T. Morgan (Emmie) and June Wilson (Brad), 23 grandchildren and 53 great grandchildren. Memorial services will be held on Saturday, June 15, 2019 at 11:00 a.m. at the Santa Clara Heights, UT, Stake Center - 1706 Desert Dawn Dr., Santa Clara, UT 84765. There will be no viewing.

The family of Richard "Dick" W Morgan created this Life Tributes page to make it easy to share your memories.

Send flowers to the Morgan family.