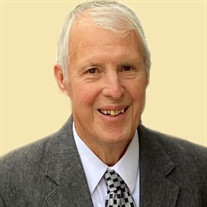 Richard Ray Tebbs, 82, local rancher, scouter, and professor, returned to his Lord and Savior on September 17, 2020 after a humble, peaceful battle with Alzheimer’s Disease. He was born October 6, 1937 in Panguitch Utah, the third of seven children of D. Ray and Verda LeFevre Tebbs. He began school in California during the war and later, after the family moved back to Utah, attended school in Panguitch and Beaver. He served his first mission in the Northwestern States Mission and then attended BYU receiving a Bachelor’s and Master’s Degree in Mathematics. He started his most important career August 25, 1962 in Manti, Utah where he married Irene Henrie, a Panguitch girl going to BYU. They started a family that finally included five girls and three boys. After receiving his Master’s Degree, he taught for a year at BYU and then moved to Cedar to begin his university teaching career at the College of Southern Utah (now SUU). During his career he taught students at all levels: special needs students at the American Fork Training School, high school, community college, and 40 years at SUU. In July of 1992 he became the first department chair of the new Math and Computer Science department. He was active in professional organizations: NCTM, UTCM and MAA Rocky Mountain Chapter and served for a year as president of that chapter. He was named Educator of the Year for SUU in 2001-2002. Richard was a faithful member of The Church of Jesus Christ of Latter-Day Saints. He served in the Boy Scouts of America for many years (with his sons and grandsons achieving the rank of Eagle Scout), he was often a ward or stake missionary, and he served a mission to London, England with his wife, Irene in 2005. He was also counselor to five bishops and served with five stake presidents on the high council. He loved going to the temple and was an ordinance worker in the St George and the new Cedar City Temples until his illness made it impossible for him to serve. He first ran sheep and then cattle at his family ranch near Panguitch Lake. He raised his children and then helped his grandchildren learn to work hard and love the land. He was known for being honest in all his dealings. Richard is survived by: his wife, Irene; his children Marilyn and Steve Bennett, Christine and Kent LeFevre, Kathy and Brad Hunter, Barbara and Cary Leavitt, Holly and Greg Wilkinson, Bruce Tebbs, Becky Tebbs, Robert and Alycia Tebbs, Brian and Jennifer Tebbs; 30 grandchildren (with 10 spouses); and 5 great grandchildren; his brother Mike and Margaret Tebbs and sisters Julia Ann and Barry Nicholes, Linda and Broyce Jacobs, and Angeli and Dean Sheffer. He was preceded in death by: his parents, D. Ray and Verda LeFevre Tebbs; sisters Marilyn K. Tebbs and Neucile and Jim Yardley; grandchildren Kimber Hunter and Joshua Tebbs and great granddaughter Lillian Bennett. The family would like to thank Dr. Todd Garrett and Dr. Tom Marshall and Ethan Bunker and the caregivers at Suntree Hospice for their patient care. Services will be held at the SUU Alumni House, 300 West University Blvd., Cedar City, UT. State building requirements mandate masks must be worn. Visitations will be held Friday, September 25, 2020, from 6:00-8:00 p.m. and again on Saturday, September 26th from 10:00 - 11:30 a.m. with the funeral for family and close friends at 12:00 noon. Graveside service and burial will be held at 3:30 p.m. at the Panguitch, Utah cemetery. The funeral service will be live streamed via Zoom. To watch online please visit https://tinyurl.com/y2w7pk7b or https://zoom.us/j/99100649301?pwd=THRYVmo0bDI0Vld3eEpLNTBQQmQxUT09 Meeting ID: 991 0064 9301 Passcode: 216986 Family and friends are invited to share tributes online at www.SerentiyStG.com Arrangements and memorial tree planting by Serenity Funeral Home of Southern Utah, 986-9100.

Richard Ray Tebbs, 82, local rancher, scouter, and professor, returned to his Lord and Savior on September 17, 2020 after a humble, peaceful battle with Alzheimer&#8217;s Disease. He was born October 6, 1937 in Panguitch Utah, the third of... View Obituary & Service Information

The family of Richard Ray Tebbs created this Life Tributes page to make it easy to share your memories.

Send flowers to the Tebbs family.