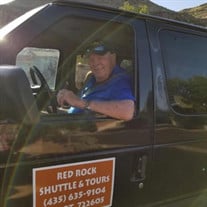 Richard (Rich) Arnold Watson, age 75, passed away peacefully in his home with his wife by his side while listening to the Grateful Dead, on December 29, 2020 in LaVerkin, Utah. He was born on February 5, 1945 in Salt Lake City, Utah to Eva Marion and Jesse Arnold Watson. He married Mary Jeane Kriegel on February 18, 1977 in Salt Lake City, Utah. Rich spent his entire life in Utah where he graduated from West High and attended Utah State University and University of Utah. He enjoyed singing and playing the harmonica with several rock and roll bands during the 60’s movement and into the 70s. He continued to entertain family members and friends throughout his life with his musical talents. He was also an avid tennis player where he won a few tournaments and played recreational everyday until golf entered his life. He was married to Mary Jeane (Kriegel) from Marengo, Iowa in 1974. They had their one and only child, Jennifer, in 1977. He became a grandpa in 2001 to Aidan and 2006 to Aspen both of whom melted his heart and changed his life forever. He loved being Papa Watson! He began a career in the transportation business that led to him starting his own shuttle business in Zion National Park and surrounding areas. Rich loved spending time in nature and going for long drives. Rich was known around town as a really good guy, and some called him the Gentle Giant. He loved volunteering for Sub for Santa and helping others when he saw the need. He had a special place in his heart for all animals. Rich and Mary spent their early years in Salt Lake City, moved to Midway where they raised Jennifer, then moved to LaVerkin, Utah to be near Zion National Park. Rich is survived by his wife, Mary Jeane (Kriegel), LaVerkin, Utah, daughter Jennifer Magoffin (Nial), grandchildren Aidan and Aspen Magoffin, Midway, Utah. He is also survived by nieces Karen Albrand, Kathleen Jones, and Joanie Hewitson, nephew David Hamilton, and their extended families. Other survivors include brothers and sisters in law, Elaine and Mike McBride, Daryl and Jan Kriegel, Dennis and Theresa Kriegel, Michelle and Doug Blythe, and Jill Young and Tim Brown, and their extended families. He is also survived by many friends, too numerous to name, whom he wholeheartedly considered as family. Rich was preceded in death by his parents Jesse and Eva Watson, sisters Jean Albrand (Kent) and Marion Hamilton (Noel), grandparents, aunts, uncles and cousins; Mary’s parents Richard and Donna Kriegel, and extra special nephew Matt McBride. Also waiting with open paws are Elinore, Lucy, Binkers, and Herman. The family would like to thank Kurt Wright who has been a real Godsend in ways too numerous to mention. In lieu of flowers, the family requests donations to BAM (Because Animals Matter) in Hurricane, Utah or any animal rescue of your choice. A celebration of life will be held on February 5, 2021 at 6:00 pm Mountain Standard Time via Zoom. Meeting ID #859 058 7336, passcode wK26fg. Rich will be cremated, and a burial will take place at a later date in Midway, Utah.

Richard (Rich) Arnold Watson, age 75, passed away peacefully in his home with his wife by his side while listening to the Grateful Dead, on December 29, 2020 in LaVerkin, Utah. He was born on February 5, 1945 in Salt Lake City, Utah to Eva Marion... View Obituary & Service Information

The family of Richard Arnold Watson created this Life Tributes page to make it easy to share your memories.

Send flowers to the Watson family.